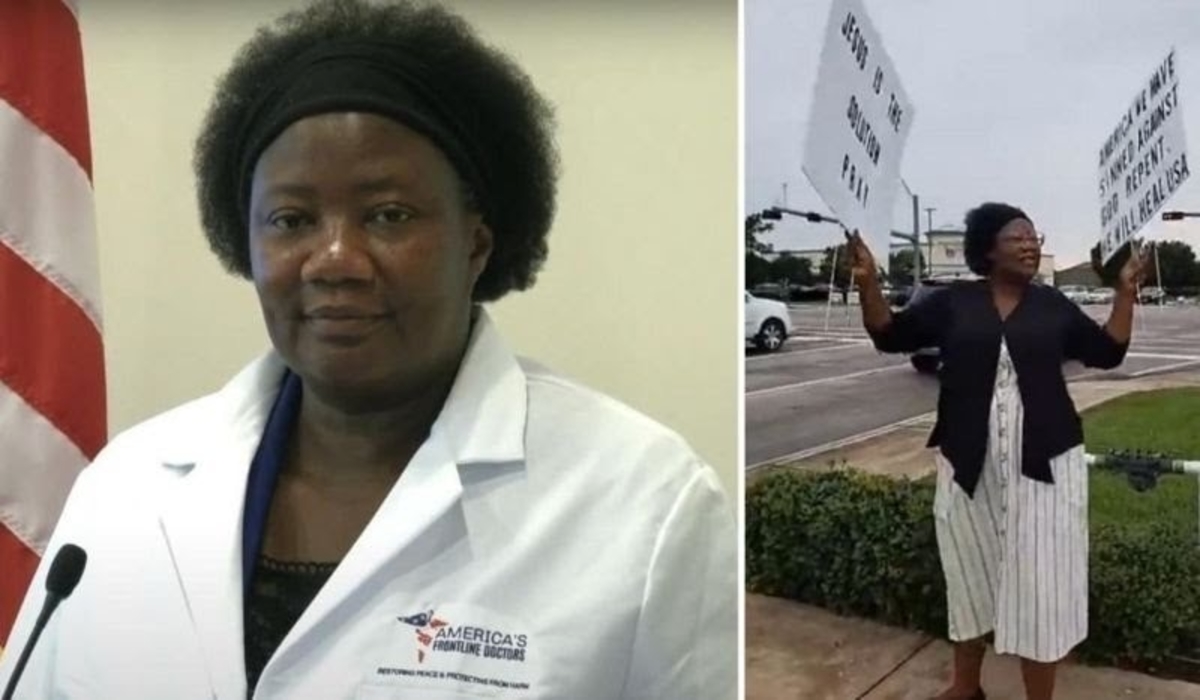 On July 28, Nigerian social media space was flooded with several versions of a video of a woman, identified as Stella Immanuel, among a group of United States’ doctors, vehemently making unsubstantiated claims about hydroxychloroquine and the ravaging COVID-19 pandemic, while dismissing other promoted preventive behaviours. The video went viral globally, generating tens of million in views across social media platforms. The video added to the streams of misinformation on the pandemic with the potential to hinder progress being made in combating the COVID-19 pandemic. The video was fact-checked by several fact-checking organisations and they all dismissed the claims.  In this piece, we examine the virality of the video among respondents, their convictions on the claims made and likely behaviour in the possibility of suspected COVID-19 infection.  Our findings supported virality of the video with more than 90 percent being aware of the video, but with limited shares among respondents. Despite repeated fact-checks, those who still believed claims made in the video were found more likely to try hydroxychloroquine than those who do not. Respondents mostly expressed positive views towards wearing facemasks to limit the spread of the virus. The virality of the video compared to its fact-checks supports the need to stop misinformation from spreading in the earliest possible time. Hence, fact checkers must continuously be alert to track misinformation in the public space and stop its spread immediately.

Among frequently shared misinformation about the coronavirus is the controversial use of hydroxychloroquine either as a curative or preventive measure to the ravaging pandemic. This was recently heightened with the viral video of a group that called itself America’s Frontline Doctors. On July 27, members of the group appeared before the United States Supreme Court in branded white coats and made a series of claims dismissing official response and measures to curtail the pandemic. The choice of the Supreme Court frontage was probably to lend credence to the group.

Among vehement speakers at the event is a controversial Nigerian-trained US-based doctor, Stella Immanuel, who made unsubstantiated claims regarding hydroxychloroquine as a cure to COVID-19 and dismissed wearing of face masks. Days later, Stella Immanuel claimed she was on a spiritual mission to save the world. Others in the video might also be of questionable personality, with this report indicating little evidence most had worked as COVID-19 frontline workers as suggested by the group’s name.

Soon after the group released the video, President Trump retweeted the video and it went viral thereafter. Several versions of the video were shared across social media platforms. The New York Times reported a version with 16 million views on Facebook alone. It was also a leading performing post on Twitter with over 14 million views.  This is despite the fact that social media companies removed the video within hours of its upload.  Not surprisingly, the video reignited widespread interest in potential use of hydroxychloroquine in combating the coronavirus pandemic. No doubt, Hydroxycloroquine has shown promising results in the management of COVID-19 cases in many societies. Recently, Director General of NAFDAC, Prof. Mojisola Adeyeye, reported positive outcomes in its use at the early stage of COVID-19 infection. Several studies are ongoing globally, with no consensus yet among the scientific community.  There has also been a call for local efforts in dealing with the global pandemic based on the peculiarities of each society. Recently, when the WHO initially called for a halt in clinical trials on the use of Hydroxycloroquine to treat the virus, NAFDAC continued its approval locally.

Existing controversy within the scientific community might thus be adding to the confusion among the general public.  Experts continue to denounce Immanuel’s claims as “personal opinion, which has no scientific backing and could simply be regarded as “unsubstantiated claims” to “be taken with a pinch of salt”. To the layman, however, she is the courageous doctor ready to go against all odds to halt the spread of the pandemic.

The video has since been debunked by fact-checkers (e.g.  Dubawa, Africa Check, Politifact), confirming that hydroxycloroquine is not yet approved as a cure for COVID-19, since research is still ongoing to test the efficacy of the drug. In this piece, we examine how selected Nigerians perceived this viral video and their subsequent reaction following the “FALSE” verdict of fact-checkers. Specifically, we examine the virality of the video among respondents and their perception of the claims made before and after reading any of the fact-checks.

This study adopted the online survey method using google form to prepare a 21-item questionnaire. The questionnaire’s link was shared through WhatsApp messaging app for people to respond to, with an additional message for recipients to help share among their contacts.  Responses were gathered over a two-week period from Saturday, August 8 to Saturday August 22, 2020. A total of 222 respondents filled the questionnaire from across the country and beyond, but with the South-west recording dominance.  The respondents comprise 54 percent male and 46 percent female. The age distribution of respondents is presented in the pie chart below.

Respondents mostly expressed neutrality in believing her claims, but with more denouncing her claims than believing it.  Those neutral about the claims and those with higher belief in the claims shared the video more than those with less conviction about the claims.  Some of those who believe her claims noted they were persuaded by her convincing oratory which according to them was “detailed with proof.”  Other reasons for believing her claims were  confirmation of their previous suspicion of a cure, lingering controversies within the scientific community, support based on success in clinical trials locally and shared experiences of recovered covid-19 patients Those who considered the claim a hoax noted their ingenuity of covid-19 misinformation and said they considered the “staged event” a “political propaganda” with unsubstantiated claims which should be viewed with scepticism, among others.

In the days following the release of the video, several fact checking organisations published fact checks on claims made in the video, amid other elements such as the so-called America’s Frontline Doctors, and individual members who featured in the video. Almost Forty-four percent (43.9%; n=94) of respondents confirmed awareness of the video fact-check while a slightly higher percentage (44.4%, n=95) claimed not to be aware. Another 12 percent were unsure of themselves.  Of the 94 respondents who confirmed awareness of the fact-checks, only 68 percent confirmed reading it.

Respondents mostly became aware of fact checks on the video after seeing online posts of fact check debunking claims made in the video. Many also found out about it through shared posts on the fact checks or were notified by social media platforms. Few respondents reported learning about the fact checks through news mention mostly on notable news media organisations such as Cable News Network (CNN) and Channels TV.

Respondents in the study were neutral in supporting fact-checkers’ verdict on claims made in the video.  The greatest percentage (35%) of respondents gave average scores to their support of the false verdict of fact checkers.  However, the percentage of those supporting the verdict (Rated 4 and 5) are generally higher than those opposing it (Rated 1 and 2).  Those opposing fact checkers’ verdict confirmed their likelihood to take hydroxychloroquine (or in combination other drugs) to prevent COVID-19 in contrast to those supporting it.  Similarly, those indecisive (rated 3) and those not supporting fact-checkers’ verdict (rated 1 and 2) were found more likely to self-medicate with hydroxychloroquine if they suspect they might be infected with COVID-19.

Respondents expressed diverse views on promoted behaviours in the video. Majority of respondents simply expressed support for wearing facemask while a few more supported the idea with notable caution.  Another dominant view focused on its preventive capability, emphasising its need to curb the spread of the virus. However, some considered the preventive ability of facemask to be relative based on specific circumstances. Less dominant views considered wearing facemask simply as a civil behaviour in obedience to official directive. Others deemphasised its necessity in curbing the virus, noting it generally filters the air we breathe in and prevents common air-borne disease. Few respondents considered it unnecessary and/or ineffective in limiting the spread of the virus while few others focused on its limitations and considered it to be hazardous suggesting it might be risky for some with underlying breathing challenges. Others were indifferent or considered wearing facemask as an individual’s choice.

Generally, the level of information sharing on the video appears to be minimal among respondents. As noted in table 10, the extent to which respondents shared the original video and its subsequent fact checks is minimal, occurring in less than 20 percent in both cases.

Findings from the study above confirm earlier observations that fact checks do not often attain the virality of misinformation posts they countered. As noted by Funke (2019), this need not discourage fact checkers as there have also been several promising results on potential of well-written fact checks to change people’s misconceptions. Fact-checkers must learn to debunk misinformation without further promoting the misinformation, by limiting detailed references to the debunked claims.

Efforts of giant social media platforms, though commendable, need to be intensified to stop the spread of misinformation as early as possible. For instance, the viral video examined in this study had been viewed more than 14 million times on Twitter and 16 million times on Facebook before its removal. Despite that, it is still likely available among millions of social media users who had downloaded it to their device’s memory while still available.  No doubt, the number of views would have been much higher had it been left online.  Fact checkers thus have to be increasingly alert to stem the spread of misinformation through prompt publication of their fact checks and aggressive promotion of their fact checks.