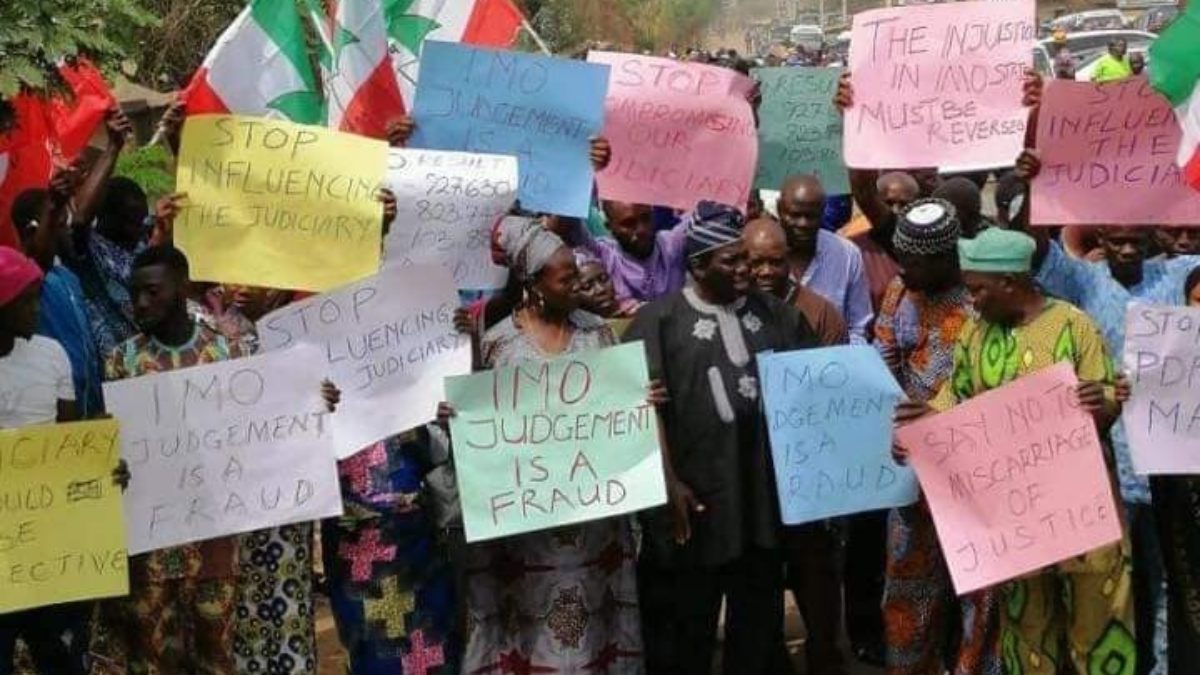 Words from the Imo State Police and the series of results provided by Google Reverse Image jointly disprove this claim. Pictures attached to the claim originate from Malawi and have nothing to do with the Imo protest.

Supreme’s court decision to replace Emeka Ihedioha with Hope Uzodima is probably not news anymore. It can be recalled that the former was the governor for over 10 months and the later held the fourth position in the Imo gubernatorial race.

This change did not go without any objection. PDP and its loyalists march out in protest to contest the decision of the court. The protests were held in different states across the country.  Abia, Anambra, Imo, Abuja, Akwa Ibom.

A Facebook User, Kellynalson Obi had reported the protest in Imo state and according to him, it was brutal as ‘several protesters’ were killed. He posted some pictures which he captioned, “Breaking news SAD SUNDAY IN IMO STATE! SEVERAL ‘PROTESTERS’ WERE KILLED TODAY, OVER THE REMOVAL OF “GOV IHEDIOHA” THE MILITARY SHOOT THEM DEAD.”

The post, as at the time of this fact-check has garnered up to 478 shares. But how true are its contents? The veracity of this claim has been called to question as there are no news reports of any violence during the Imo state protest.

Dubawa put a call through to the Police PRO in Imo State, SP. Ikeoku Godson Orlando. He confirmed that there was no violence anywhere in Imo after acknowledging that the protest was a peaceful one. According to him, ‘there was a protest but it was absolutely peaceful.’

Hence, Dubawa resorted to performing google reverse search on the pictures attached to the claim.

Kellynalson had published his claim with two pictures attached and Dubawa conducted a reverse search on them.

It happened in Malawi, not Nigeria, Imo…

When we checked the first picture, Google brought back a number of results, one of which is this Twitter post from January 16th. The tweet talked about how the military provided security for anti-government protesters in Malawi.

Another result, providing insight into the Malawi incident is this publication by Nyasa Times.

Furthermore, we found another January 16th tweet on the same incident which had both pictures used by the claim’s author. Evidently, the demonstration captured in the photos is fairly recent; just not in Nigeria.

The second picture used by Obi in his Post, after conducting a google reverse search also tells the same story as the first. Friends of Malawi Defence Force, a Facebook page posted the picture on the 17th of January, making reference to the Malawian protests; so also this Twitter user.

The results provided by Google Images and the testimony from the Imo police have proved this claim to be another case of disinformation. Hence, nullified the assertions of the Facebook User.  In the absence of any substantial materials to corroborate his claim dubawa considers it false. We don’t know the intention of this User but results from this fact-check suggest that the user only wanted to instil fear in the minds of the people.