A  user on Twitter claims that pictures of NCDMB’s 17-storey building project in Bayelsa are pictures of buildings from Hong Kong.

The claim that pictures of NCDMB’s 17-storey building project in Bayelsa are pictures of buildings from Hong Kong is not true. All shreds of evidence show that the building, recently inaugurated as headquarters of the Nigerian Content Development and Monitoring Board (NCDMB), is in Yenagoa, Bayelsa State.

A user on Twitter, Lawrence Lurrrenzo Onuzulike, on August 13, 2020, contends that some pictures of the newly inaugurated headquarters of the Nigerian Content Development and Monitoring Board (NCDMB) in Yenagoa, Bayelsa State, are pictures of some structures in Hong Kong. In his tweet, he stated that:

“I’m a Buharist too but let’s not over do things guys. Stop taking pics from Hong Kong and calling them @MBuhari’s NCDMB’s 17-story project in Bayelsa State. If certain people couldn’t do this in 16yrs how then do you expect  Buhari to do it in such a short time?”

Even more, the NCDMB edifice was virtually commissioned by President Buhari the same day the claim was made. This mix of circumstances appears to have given the claim an even more fertile ground to nurture, as the tweet would soon attract 67 comments, 159 retweets, and 496 likes in less than 24 hours of its emergence, to stimulate tempestuous debate among diverse groups.

A Google reverse image search of the image traced the pictures to multiple media sources that reported on the inauguration of the Nigerian Content Development and Monitoring Board (NCDMB) structure in Yenagoa, Bayelsa State.

Similarly, parts of the edifice were also traced back to the main page of the NCDMB website and on their Twitter handle, where it was displayed alongside a declaration.

Furthermore, Villaupdates, a Twitter handle covering government activities, shared the same picture, referencing it to the newly completed NCDMB’s 17-storey building and so did TVC News which shared the video footage of the structure.

Evidently, all the pictures and videos shared by these entities portrayed the same building the claimant is asserting to be from Hong Kong.

Even more revealing, throughout the search on Google reverse image, Dubawa could not trace any link to any structures in Hong Kong or elsewhere. All results traced the image back to NCDMB affiliated websites and other news websites that shared the inaugural story, just as Bashir Ahmad, Personal Assistant on New Media to the President, shared a tweet with the exact photos announcing the commissioning of the building. 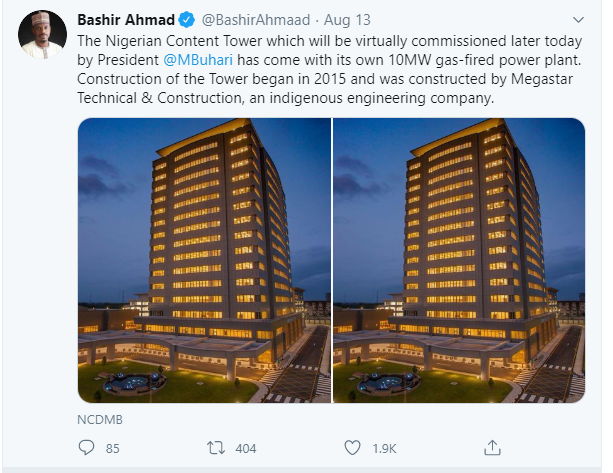 The constructors of the edifice, Megastar constructions, also presented on their website, details of the structure from the onset to its completion in clear vivid pictures that correlate with the acclaimed photos.

Pictures of buildings presented by the claimant to be of an edifice in Hong Kong is false. The pictures are of the  newly commissioned headquarters of the Nigerian Content Development and Monitoring Board (NCDMB) in Yenagoa, Bayelsa State.

Establishment of Entrepreneurial Agency Claim by Akeredolu a Hoax

Does corn silk cure diseases as claimed in this video?