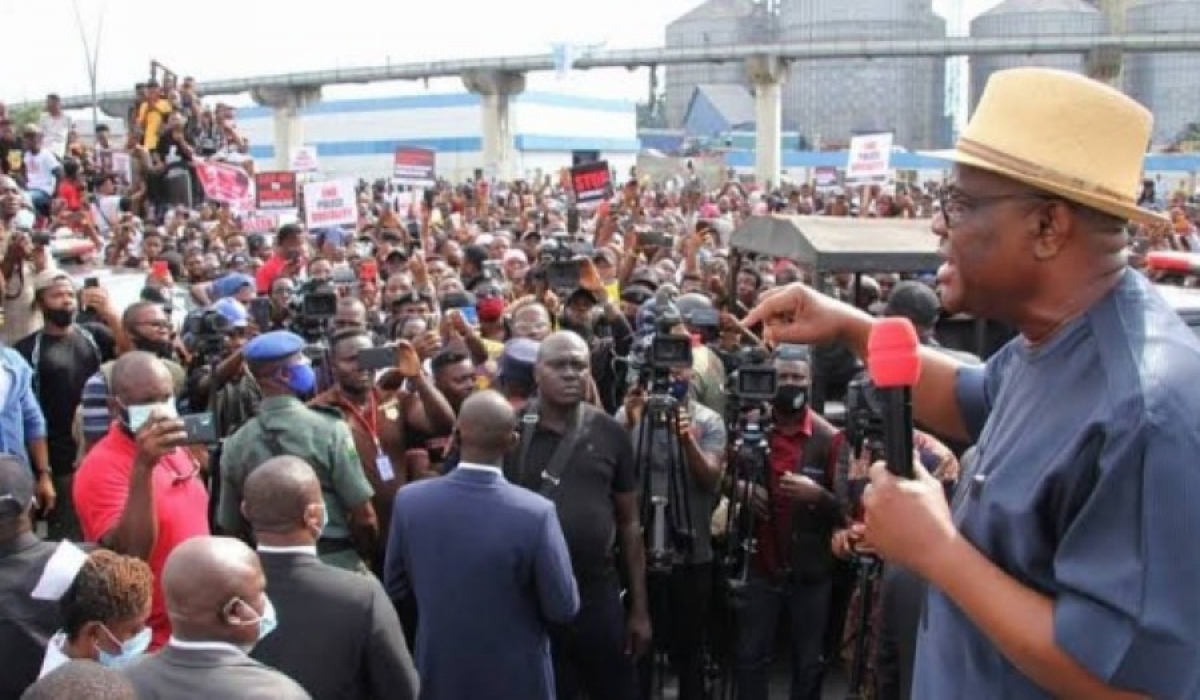 False. The recent circulating video was an edited version of a video posted  on September 13, 2017. In the full video, Gov. Wike categorically mentioned the former State SARS  commander, Akin Fakorede of  perpetrating crime in Rivers State.

Following cases of brutality by men of the Special Anti Robbery Squad (SARS), thousands of Nigerians nationwide and in the diaspora have been staging protests in the past few days.

Following the protest, the Inspector General of Police on Sunday announced the disbandment of the police unit but protesters did not back down. They asked for a reform of the entire police force, justice for the victims of brutality, an executive order to the effect of the proscription among others.

In the midst of the protest, Nigerian politicians and celebrities have also shown solidarity and support to the agitation.

One of such videos is that of Rivers State Governor, Nyesom Wike, condemning SARS activities in the state. However, the authors of the videos claimed the Governor is in support of  the ongoing Nationwide #EndSARS protest.

Gov. Wike’s statement in the edited video; “On monday at Orazi, which is my community. Some people went at night to kidnap somebody in their house  and took him to the ATM to withdraw money, the men were wearing SARS uniforms. Today, i’m not acting for the authorities to take action but am letting the world know that the insecurity in Rivers State is perpetrated by the SARS commander.”

The video was posted by several twitter users with different captions.

On October 9, a twitter user with the  name GP and handle @GPda4you, posted the video with a caption that Governor Wike was in support of #EndSARS. The video was viewed by over 7, 900 persons, had 20 comments and 862 retweets.

Similarly, a Youtube user identified as Chizzy TV posted an edited version of Gov. Wike’s statement about SARS performance in the 2015 election, claiming that “Wike statement is another confirmation that SARS is Northern Agenda. SARS is a Northern rigging and killing machine, that is why their atrocities are being carried only in southern Nigerian” and the hashtag EndSARS was used.

Dubawa used Google search engine to track the edited video. Google took us to the full video on the Governor’s official facebook page. The video was first posted on September 13, 2017.

In the original video, Governor Wike accused Akin Fakorede, the then SARS commander in Rivers State as the perpetrator but the circulating edited video left out this part. This appears as an intentional act to convince the public that Governor Wike was attributing the statement to the current EndSARS protest.

Also, the full video captured the then Rivers SARS commander, Akin Fakorede harassing voters in the Rivers re-run elections in 2016.

Governor Wike on October 12, released a statement banning any form of protest on ENDSARS as the President had already scrapped the unit. Rivers residents had planned to join Nigerians in other states on Tuesday 13  October to protest against the harassment and killings of Nigerians by SARS.

Although, despite banning protest, Gov. Wike however addressed the protesters, saying, “when SARS was killing my people and I have been shouting no one wants to hear me, now that they are killing their people, they want me to talk, no I won’t talk.”

The circulated video of Governor Wike accusing SARS is an old edited video first posted in September 2017. Therefore, it should not be considered as evidence of Wike’s support to the recent #EndSARS protest.

This fact-check is produced under the auspices of the Dubawa 2020 Fellowship IN partnership with TODAY95.1FM, Port Harcourt  and NEWSWIRE, NGR to facilitate the ethos of “truth” in journalism and enhance media literacy in the country.