Weapon import denial not reason Nigeria is at terrorists’ mercy

Claim: The Minister of Information and Culture, Lai Mohammed, recently claimed that Nigeria has remained at the mercy of terrorists because global partners denied attempts by the country to acquire platforms and weapons to fight the terrorists.

Misleading. There is evidence of Nigeria’s purchase of weapons and platforms from different countries. Though the United States blocked Nigeria’s weapon purchases in 2014 due to alleged human rights violations, President Trump overturned the arms embargo in 2018. It is misleading to attribute Nigeria’s inability to end terrorism and armed banditry to such denials since the country has been importing platforms, arms and ammunitions from several other countries.

The factional leader of the dreaded Boko Haram terrorists, Abubakar Shekau, confirmed that his group was responsible for the killing of the rice farmers, adding that they killed 78 farmers in the attack.

A recent video posted online by ChannelsTv, the Minister of Information and Culture, Lai Mohammed, claimed Nigeria’s efforts to procure ammunition to defeat terrorists were “denied” and unless the weapons are acquired, Nigeria would continue to be at the mercy of terrorists.

How true is this claim?

In 2014 the United States ruled out heavily arming the Nigerian military because of its alleged poor human rights record.

In a speech before the US Institute of Peace in August 2015, President Muhammudu Buhari complained that the US had “aided and abetted the Boko Haram terrorists” by refusing to send arms to Nigeria forces on the grounds of “unproven allegations of human rights violations levelled.”

In  the same year, the US cancelled a shipment of attack helicopters to Nigeria, even though the deal had already been signed. However, that same year, Nigeria placed an order and received six Mi-35M combat helicopters from Russia.

In addition, Premium Times reported on September 17, 2014, that the Nigerian government opted for a discreet purchase of arms with cash as a measure after the American government allegedly blocked all legitimate arms orders made by the military.

In 2018, US President Trump overturned an arms embargo imposed by his predecessor, Barack Obama.

Trump agreed in 2018 to sell arms and fighter jets to Nigeria to fight Boko Haram.

Same year, Nigeria paid the United States government $496 million for the acquisition of 12 Super Tucano fighter jets to be used by the Nigerian Air Force.

Nigerian Air Force disclosed that from 2015 to date, Nigeria has acquired 23 brand new aircrafts, including the latest Mi-171E Helicopter acquired from Serbia by the federal government.

The Serbian Ilyushin 76 Strategic Airlifter aircraft that brought the latest helicopter touched down at the NAF Base, Makurdi on December 3, 2020.

A statement released by the Director of Public Relations and Information of the Nigerian Air Force (@NigAirForce), Air Commodore Ibikunle  Daramola, revealed that, “The new aircraft is the second of two Mi-171E helicopters procured by the current Federal Government and brings to 23 the total number of brand new aircraft acquired since 2015.”

NAF tweeted the photos of the latest helicopter on its official handle, @NigAirForce 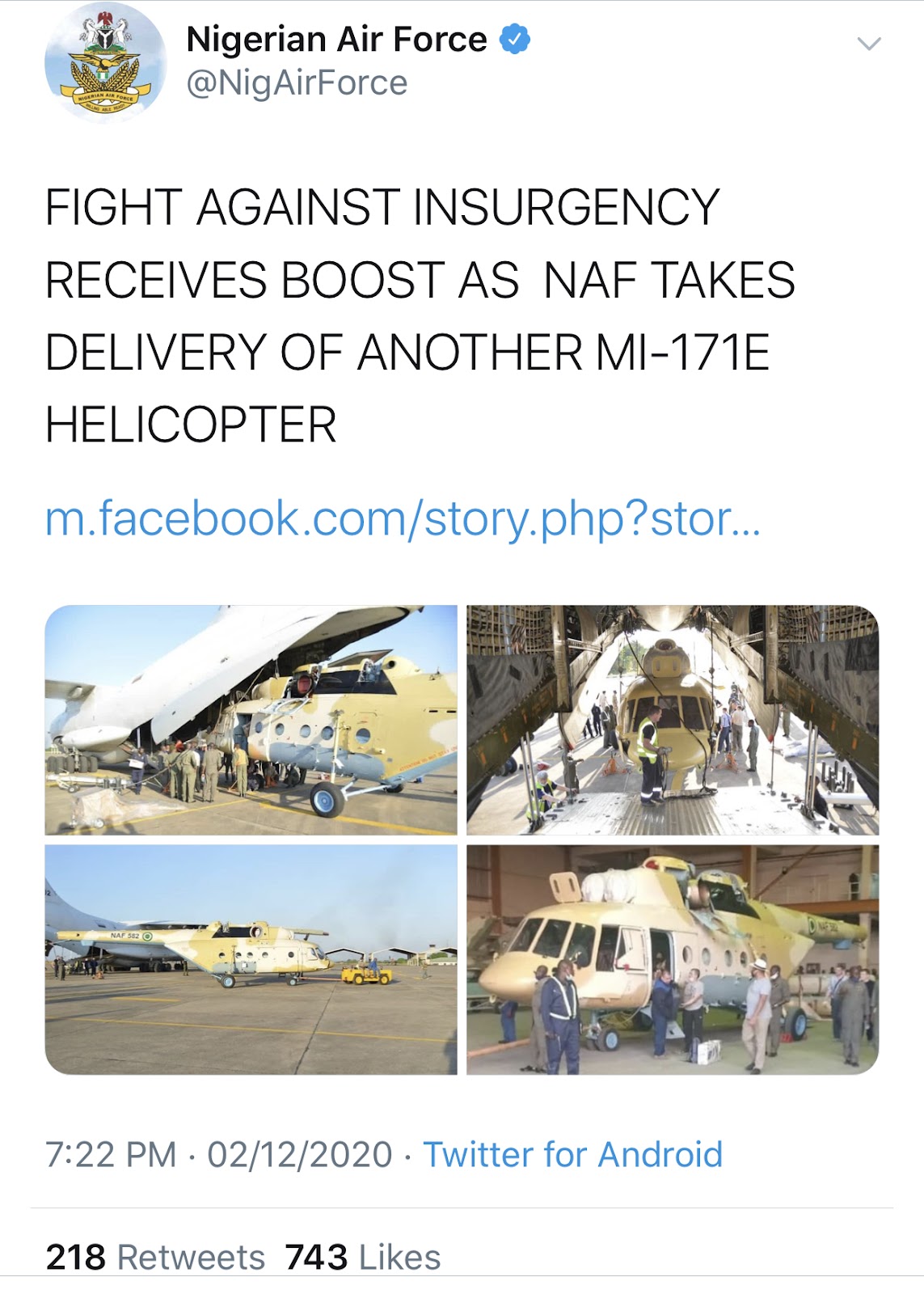 Recently, the Chief of Air Staff, Sadique Abubakar, told the Senate Committee on Air Force that Nigeria has procured aircrafts from different countries.

“We are expecting 3 J-17 fighters from Pakistan, 12 super Tucano from the United States, one M-171… Out of the 12 A – 29 Super Tucanos from the US, six are almost here as those to handle them have been sent on training for that purpose,” he said.

On November 30, 2020, NAF tweeted that the A-29 Super Tucano Aircraft Project between Nigeria and the United States of America is still on course for delivery as scheduled as President Muhammadu Buhari ordered in April 2018.

Taking delivery of the armaments then, Army’s Chief of Policy and Plans, Lieutenant General Lamidi Adeosun said Nigerians should expect more robust operations to overtake the menace of insecurity including Boko Haram, banditry and others.

“From this, you can see how serious the Federal Government of Nigeria is in making sure that the Nigerian Army is not only equipped, but contains the problem of insecurity we are having across the country,” Lieutenant General Adeosun said.

Significantly, data from the National Bureau of Statistics (NBS) showed that Nigeria spent N115.88 billion on import of arms and ammunition in five years.

Interestingly, NBS data showed that in the first half of 2020, Nigeria has spent about three times the amount of money spent in five years in importing arms and ammunition.

The first and second quarters, 2020 Foreign Trade Statistics released by the NBS showed that from January to June, 2020, Nigeria spent N54.8 billion on arms and ammunition importation.

However, the data were not disaggregated on the basis of private and government purchases, but it gives a clue to rising importation of arms and ammunition into the country.

Being that these arms purchases were recorded by a government agency, it is most likely the government’s property or that of few individuals with licenses to import arms could have been included in the tally given by NBS.

The SIPRI values cover the supply of military weapons through sales, aid, gifts, and those made through manufacturing licenses. Data cover major conventional weapons such as aircraft, armored vehicles, artillery, radar systems, missiles, and ships designed for military use. Excluded are transfers of other military equipment such as small arms and light weapons, trucks, small artillery, ammunition, support equipment, technology transfers, and other services.

In April this year, President Muhammadu Buhari dispelled the commonly held assumptions that the terrorists in the Northeast had far more weapons and money than the government, stressing that what was left of them were “mere scavengers desperate for food, raiding shops and markets, and killing innocent persons in the process.”

A statement released by Senior Special Assistant to the President on Media and Publicity, Garba Shehu on August 11, 2020, quoted the President as saying, “The services have resources; yes, they need more, and mobility, and are doing their best, but there is a need for better gathering and interpretation of intelligence.”

Shehu disclosed that the President informed the Governors of the imminent shipment of military weapons and aircraft from Jordan, China, and the United States and that this could be the reason Nigeria spent N54.8 billion on weapon imports in the first half of 2020, more than the amount spent in five years recorded by the NBS.

Although efforts of Nigeria to import platforms and weapons from some countries may have been denied,  there is evidence of Nigeria’s weapons and platform purchases from different major arms producing countries. Though the United States blocked Nigeria’s weapon purchases in 2014 due to alleged human rights violations, President Trump overturned the arms embargo in 2018. It is misleading to attribute Nigeria’s inability to end terrorism and armed banditry to such denials as the country has been importing platforms, arms and ammunitions from several other countries.

The researcher produced this fact-check per the Dubawa 2020 Fellowship partnership with Daily Trust to facilitate the ethos of “truth” in journalism and enhance media literacy in the country.