5 mins read While the intent behind such a message cannot be ascertained, most of its content were surprisingly accurate… 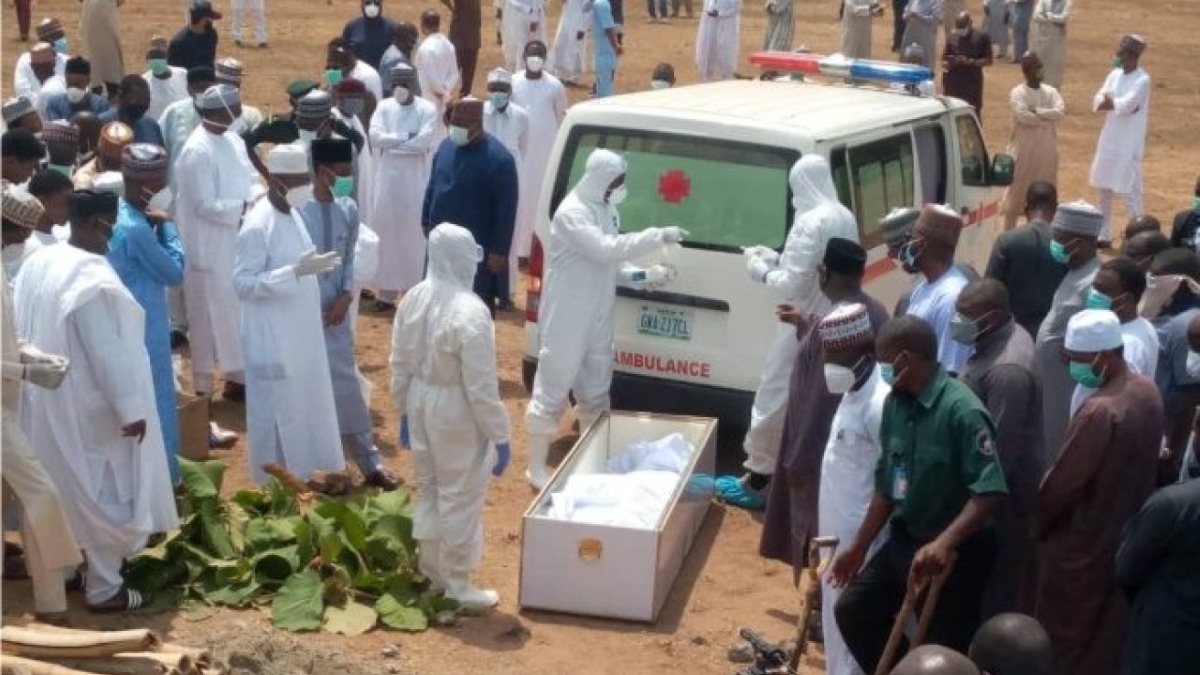 On Saturday, April 18th, news of Abba Kyari’s death went viral; as a result, Nigerians took to their social media handles to share their thoughts about the President’s Chief of Staff. While Twitter welcomed mixed-reactions from the people, we received a long text from WhatsApp.

From the text, we have drafted the following claims:

Thisday broke the news on Abba Kyari’s COVID-19 on March 24. However, Sahara Reporters first broke the news a day before, albeit based on a gut-feeling; the paper later confirmed their suspicion the following day when hunch became fact.  Kyari, himself further affirmed the revelation in his statement on 29th, where he revealed he would be going to Lagos for further tests and observation. He was there till April 18th, Saturday where he reportedly died.

The lockdown in Abuja, Lagos and Ogun became effective 11 pm on 30th Of March; occurring a day after Abba Kyari released a statement, confirming his COVID-19 status. In this statement, released on the 29th of March, Kyari announced his transfer to Lagos for further observation and tests.

“I am writing to let you know that on medical advice, I will transfer to Lagos later today for additional tests and observation…”

Supporting this report is the publication by DailyTrust that included Kyari’s arrival in Lagos in an air Ambulance. The Lockdown, however, did not start until 11 pm on the 30th of March.

Be that as it may, a publication suggested that Kyari violated the Quarantine Act for embarking on private treatment against advice of government officials and top health practitioners.

While is true that Abba Kyari was flown to Lagos from Abuja, it is important to note that according to available evidence, he arrived Lagos before Lockdown came into effect.

CLAIM 2: He was treated privately at First Cardiology in Ikoyi  (not Isolation Centre).

The Lagos State Commissioner for health, Akin Abayomi, has confirmed, as published by Premium Times, that the former Chief of Staff to President Muhammadu Buhari had died in a private hospital identified as First Cardiology Consultants, situated in Ikoyi, Lagos.

However, we recall the health minister, Osagie Ehanire, previously said that there were no private hospitals for managing confirmed cases of COVID-19 disease in the country. He made the statement while responding to questions on whether any private hospital had been accredited for the management of COVID-19. He added that the management of the disease is difficult and can overwhelm private facilities.

While the hospital is not an isolation centre, the Lagos State government has said the hospital has the capacity to manage COVID-19 cases and has been accredited.

However, The Nigeria Medical Association had warned against treating COVID-19 patients outside isolation centres; as “there are so many things involved which go beyond the expertise of the medical personnel.”

Following the death and burial of Kyari, the Lagos state government has ordered for the closure of First Cardiology and suspension of operations at the private hospital for decontamination.

The chain message was accurate concerning Kyari’s treatment being in a private hospital. The said hospital in Lagos State managed his condition until he died. This action, however, has sparked reactions from health experts as well as the Lagos State government who reportedly closed the hospital for fumigation.

CLAIM 3: The authorities released his body for burial, contrary to what Lai Mohammed said about COVID-19 dead bodies.

On April 3rd, The Nation noted the Minister of Information and Culture, Lai Muhammed, saying that corpses of COVID-19 positive patients were the purview of the ministry of health; further stating that loved ones cannot claim them for burial. He also said the department of health would handle the bodies because they are contagious.

Yet, on 18th of April, authorities released Abba Kyari’s body and flew him to Abuja for burial at Gudu Military Cemetary. However, the men that buried his remains were ensembled in protective equipment.

According to the Nigeria Centre for Disease Control (NCDC), in its Interim Guidelines for the Safe Management of a Dead Body in the Context of COVID-19, bodies of coronavirus victims can be infectious only if the pathologist mishandles the patient’s lungs during an autopsy. The agency further said, “To date, there is no evidence of infectious bodies of persons who died of COVID-19.”

But NCDC has not stated whether it is right or wrong to release COVID-19 dead bodies for burial but has made provision for family members and friends to view the corpse before burial while making sure to observe certain precautions during and after viewing.

“Family and friends may view the body after it has been prepared for burial, in accordance with customs. They should not touch or kiss the body and should wash their hands thoroughly with soap and water following the viewing; physical distancing measures should be strictly applied (at least 2 meters between people).”

Additionally, the NCDC put guidelines in place for anyone that wants to bury the dead.

The WhatsApp claim is accurate. However, Lai Mohammed’s statement that the bodies are contagious is not entirely true. Remains can only be infectious if the Pathologist mishandles the patient’s lungs of the patients during an autopsy. However, seeing as the amount of care rendered during Kyari’s autopsy (concerning his lungs) remains with his Pathologist, we cannot be sure; even a report may not paint an accurate picture.

CLAIM 4: Claims about unprofessional and unhealthy conduct at the burial site.

The Health and Human Services Secretariat of the Federal Capital Territory Authority has acknowledged and addressed all unprofessional conduct presented in the WhatsApp message in a statement. The statement urged residents to remain calm; further promising that in the future, burial arrangements will be in line with the protocols established by the NCDC.

Conversely, the taskforce refuted a falsehood circulating on social media; positing the agency gave a would-be apology for violating social-distancing protocols. Notwithstanding, the Secretary to the Government of the Federation (SGF), Boss Mustapha, subsequently admitted to “unintentionally” violating COVID-19 protocols. Mustapha, who doubles as the head of the Presidential Task-Force (PTF) on COVID-19, made this revelation during a PTF briefing.

Meanwhile, the Federal Capital Territory Enforcement Team expressed their aloofness with regards to the burial. The team’s head, Attah Ikharo, revealed this, also stating how the agency has prosecuted over 150 persons; promising more ongoing prosecutions as the team ascertains the total number for the day. It is also important to note that the presidency has denied Villa access to some of its aides; the ones who attended the funeral.

All available evidence supports the assertion that the funeral proceedings breached NCDC’s protocols; however, the federal authorities launched preemptive initiatives to curb the spread resulting thereof.