The claims that the account of Kenyan President Uhuru Kenyatta got suspended after Biafrans reported it over the arrest of Nnamdi Kanu is false.

A Twitter user CorrectBN with handle @correctbn in a tweet on July 1, 2021, claims the account of Kenyan President Uhuru Kenyatta got suspended after Biafrans reported it over the arrest of Nnamdi Kanu.

Kanu, the self-styled leader of outlawed movement, the Indigenous People of Biafra (IPOB), which agitates for a separate state for ethnic Igbos in southeast Nigeria, has been labelled a terrorist organization by the Nigerian government.

The IPOB leader, who was facing charges bordering on treasonable felony following his campaign for the secession of Republic of Biafra, had jumped bail in 2017 after a military action, code-named “Operation Python Dance”, targeted his family house in Abia state

His arrest was announced by Nigeria’s justice minister and Attorney General of the Federation, Abubakar Malami (SAN), who said it was done in collaboration with INTERPOL.

To verify this claim Dubawa began by conducting a search on the microblogging platform Twitter to find out if the account truly existed, which returned a series of parody accounts carrying Kenya’s president name and picture.

However, a Google search revealed a story published in March 23 2019 about the President temporarily deactivating his social media accounts due to what it termed infiltration by unauthorised individuals. 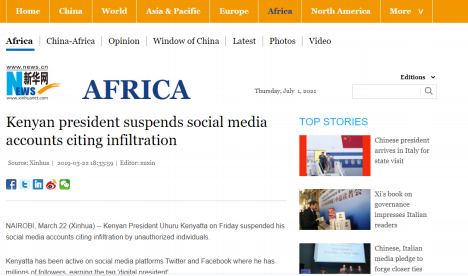 Screenshot of the news on news.cn

A further search on the handle in question @UKenyatta reveals that it was a parody account created in March 2020 almost a year after the government announced the deactivation of the President Twitter account. This simply means that the username was available and someone took advantage by making a parody out of it. 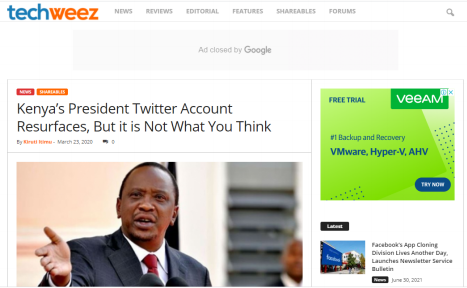 Also, in November 2020 President Kenyatta while talking about deactivating his personal Twitter account which reported by Arise tv says he would rather talk to his wife and sleep, because he always gets angered by the insults on Twitter and couldn’t sleep.

The Kenyan President’s personal twitter account had more than three million followers before it was deactivated and his administration now uses a verified State House account @StateHouseKenya, which has over one million followers. 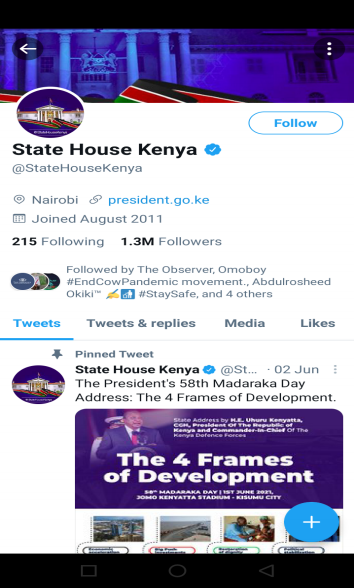 Google is a good source but you have to be smart when using it.

Nuhu Ribadu, Not Author of the ‘Bombshell on Banditry’ WhatsApp Message