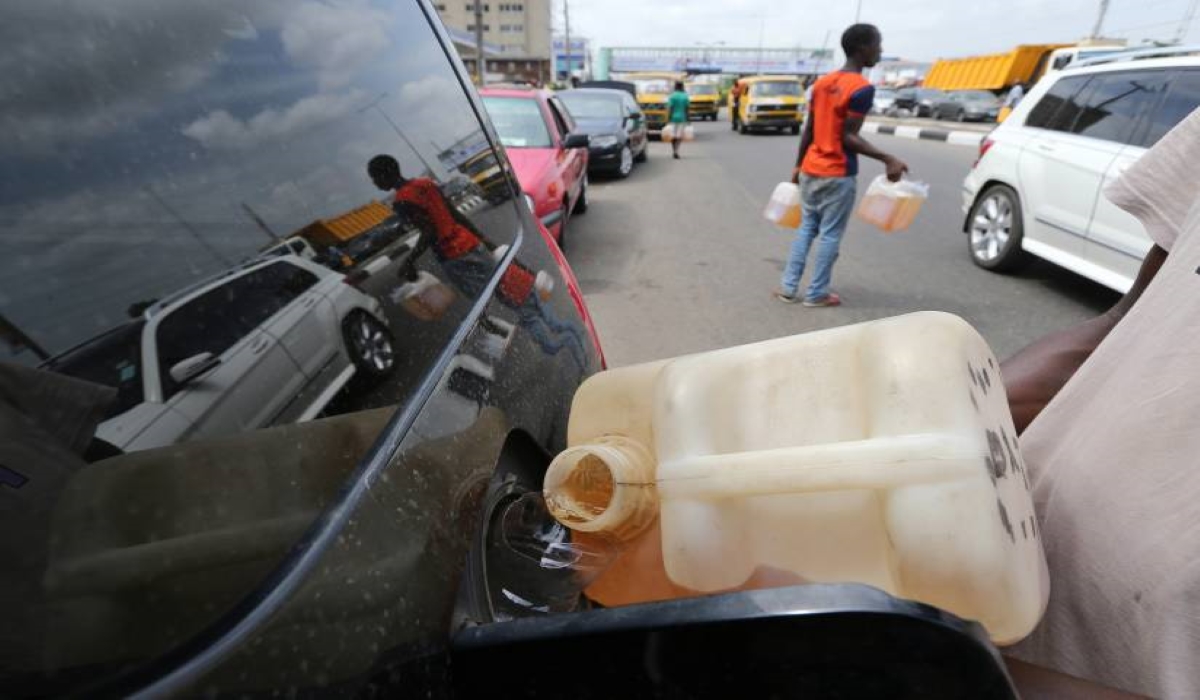 The Naija247news website recently claimed that fuel scarcity in the United Kingdom has caused the arrest of about six Nigerians for hoarding and selling black market fuel at outrageous prices.

The three-paragraph story was published on 28 September, 2021, accompanied by a picture of a young man fuelling a yellow bus on a busy road that looks like a typical Nigerian road. Without full details the story says “More details & Pictures loading.”

The full story reads: “Following the Fuel scarcity in the United Kingdom about six Nigerians have been arrested for hoarding Fuel in Jerry cans and selling at outrageous prices.”

According to a UK police spokesman, those arrested will be charged to court on allegations of conspiracy to cause scarcity of petroleum products in the United Kingdom.

At the time of filing this report, no details and pictures have been updated as promised by the story.

In the same vein, a Facebook user Maiwada Dammalam posted the same story on 29 September 2021 with the question “Nigerians or Biafarans?” at the end of the post. The story which got 145 comments and 108 shares was greeted with mixed reactions.

Muhammad Garba Muhammad sarcastically said the culprits are not supposed to be called Nigerians because they a representing Biafara. “These people are Biafrans a.k. a. the Doted Nation. I wonder why on Earth would you called them Nigerians, Nigeria is for the patriotic citizens not imbeciles like the IPOBIANS. The Question at first place does not even arise”.

In response to the similar response as Mohamad, Ikechukwu Obi advised users to verify the story as he has checked credible news websites for verification but found nothing. “I have scoured the Internet for any credible source to this news and found none.”

This researcher observed the the absence of a proper by-line and many obvious typographical errors, as spokesman was spelt “spokesma, so Dubawa continued to ascertain the genuineness of this claim.

A key word search revealed that this claim has been making the rounds and it has been shared widely on social media and blogs.

Another  keyword search to get details of the fuel scarcity in the UK revealed that on 23 September, 2021, BP, an oil industry in the UK, warned it has to “temporarily” close some of its petrol stations due to a shortage of lorry drivers.

The oil firm said only “a handful” of sites were affected by the fuel supply issues, which have led to a lack of unleaded and diesel fuel.

Long queues started to build up outside stations across Great Britain over the weekend, amid fears that petrol might run out.

Further verification revealed that the story has been copied word for word, with the same picture, and published on Naira land forum, Naijaloaded, Daily report Nigeria and other similar websites, within a few hours.

So this researcher decided to verify the picture attached to the publication by subjecting it to reverse image search, using Google lens, a web tool used to  verify the authenticity of pictures, and the search revealed that the picture was used for a fuel scarcity publication in 2016 by the Sun newspaper.

Since the claim said that the UK police spokesman Greg Smith confirmed the arrest, Dubawa decided to look up the name “Greg Smith” and it revealed that Greg Smith is a member of parliament for Buckingham, who has been the Member of Parliament (MP) for the Buckingham constituency since the 2019 general election. Later this researcher sent an  email to Greg Smith, using the contact provided online to confirm the authenticity of the story but got an automatic reply that says he will  respond to the mail within 14 days. As it is, the researcher is still waiting for an official response from Smith.

Further, the researcher checked the names of the alleged culprits, just in case it would reveal relevant information, but nothing tangible was found.

Dubawa discovered that the UK does not use a centralised Police system with one spokesman. The UK does not have a national police force. Instead, there are 44 geographic forces in England and Wales, and a single force in Scotland and one in Northern Ireland.  Specialist police forces that work alongside the geographic forces include the British Transport Police, the Ministry of Defence Police and the Civil Nuclear Constabulary. Unlike  Nigeria that has a National Police Force.

So these forces are aggregated under the National Police Chiefs’ Council (NPCC) and they use ‘Lead Officers’ for specific crimes and issues.

The National Police Chiefs’ Council (NPCC) is a national coordination body for law enforcement in the United Kingdom and the representative body for British police chief officers.

Dame Cressida Dick is the current  Metropolitan Police Commissioner in the UK.

Is it possible to sell black market fuel in the UK?

Research has revealed that Many countries across Europe have been affected  but the UK has been especially badly hit.

Further verification shows that Black market jerry cans were sold for £50 on Facebook on the 29th September 2021, this is a typical example of the way fuel black markets operate in the UK.

This is to say that selling in jerry cans on the street would not be the form of black market the UK would experience because the government would definitely arrest perpetrators.

How the black market operates

Deep web concept is quite simple. Search engines such as Google, Yahoo and Microsoft’s Bing give you results about constantly indexed pages. When the web crawler arrives at some other sources such as a database, it typically cannot follow links into the deeper content behind the search box. Google and other search engines also don’t capture pages behind private networks or standalone pages that connect to nothing at all. These are all part of the Deep Web.

The researcher produced this fact-check per the 2021 Kwame Karikari Fact-checking Fellowship partnership with JAY 101.9 FM Jos to facilitate the ethos of truth in journalism and enhance media literacy in the country.