China Is NOT Seeking Approval for Gross Homicide! 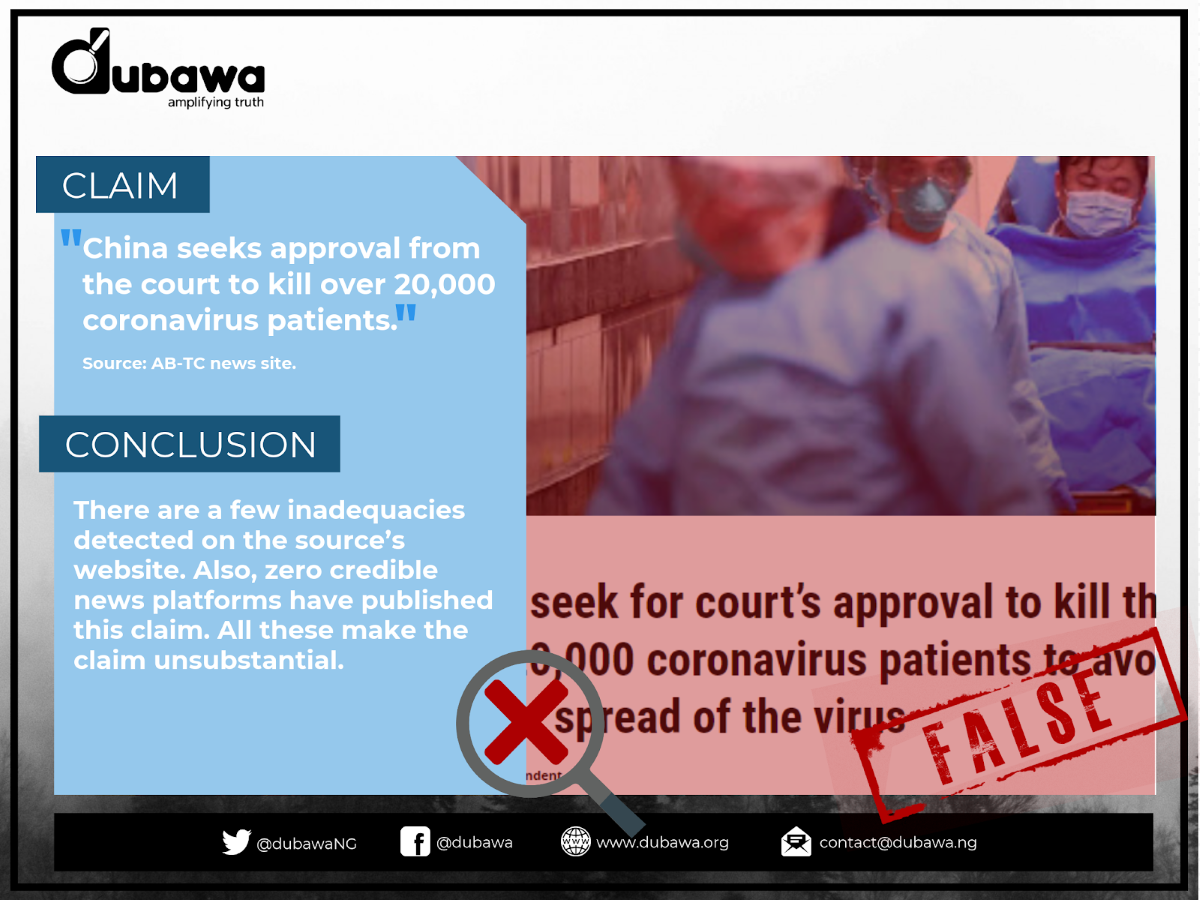 Adding to the wave of misinformation on the new Wuhan Coronavirus is this publication by CityNews. The news platform claimed that China is seeking approval from its Supreme Court to kill over 20,000 coronavirus patients.

City News published this report on the 5th of January 2020 with the byline, ‘Local Correspondent’. It also surfaced on GistLover, AbujaPress, itrendnaija amongst others.

As the number of infected people keeps increasing, so does the number of people dying from the novel coronavirus. Not to mention, reports suggest the virus has beat its sister virus- SARS- in a death toll surpassing 900. As a result, fear has ensued as relevant health authorities are yet to zero in on a permanent solution to this crisis.

Thus, if this claim turned out to be true, efforts to find the cure would prove a Sisyphean. This is especially true for a country like Nigeria whose health sector may be ill-equipped to handle a viral outbreak when compared to China.

To start with, no credible news platform has reported this claim. Moreso, the report has no proof to corroborate its claims, it has no mention of any source for its claims. This is of course besides the fact that the article has no byline, only “Local Correspondent’’, not to mention the error in the spelling of china – “Chhina”.

Moreover, the carrier of this claim – CityNews – is unreliable. Snopes, in this publication, has pointed out the inadequacies in some of its (CityNews) early reports. Also, our findings show AB-TC news site is not the most reliable. It had published an erroneous report about a New York coach and articles about a restaurant allegedly encouraging cannibalism which Snopes rated false.

While revealing the results of its findings, Boom gave details about the shady website here and rated its claim false. The Indian fact-checking platform further revealed pertinent intel regarding AB-TC (City News).

According to Boom, Guangdong China is the registration point for City News; set up just seven months ago in June 2019.

The Times of India has also taken time to debunk this viral report, calling it a rumour. “No credible media house has reported this; the claim is at best a rumour.”

Last but by no means least, the website of the Supreme People’s Court of China has made no mention of the claim.