Fact-checking attacks on Zulum and the misleading video in circulation

A TWITTER user @von_Bismarck uploaded a video clip of a tense atmosphere, showing a face-off between two parties where some men are seen running out of the scene while cars move violently. Three of the men were seen with cameras while gunfire sound and wisp of smoke which rented the air are seen in the 23-seconds video clip.

However,  the poster claimed with the video clip that Babagana Zulum, Borno State governor, was under attack by Boko Haram insurgents. He advanced that the governor is being ambushed for the third time.

The clip which had been viewed by 9,171 twitter users was liked by 133 users and retweeted 122 times before it was deleted. 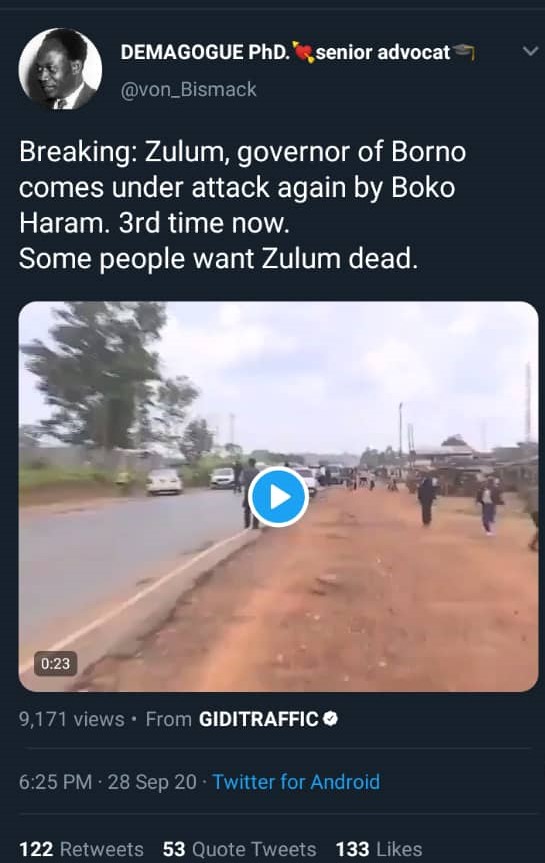 In less than 2 hours, another twitter user with over 9,000 followers, @UMHmanga___, quoted and rebutted the claim on the ground that the incident in the video was not in Maiduguri and “this is not even Nigeria”

Then we chose to fact-check.

2- That the attached video is not about Maiduguri

On July 29, Boko Haram operatives launched the first attack on Zulum together with his convoy while on his way to distribute food relief to IDPs in Baga. Though the attack was repelled by security operatives in the governor’s convoy, there were casualties on the side of his entourage.

Baga town was displaced by the Boko Haram insurgents 21 months ago, with most of the residents taking refuge in Monguno and Maiduguri.

On Friday 25th of September, the governor’s convoy was again attacked between Monguno and Baga areas of the state which left about 30 persons dead.

The Governor was in Baga between Friday and Sunday to supervise preparations for safe resettlements of Internally Displaced Persons at the commercial town which used to be strategic to Boko Haram’s commercial operations.

However, for the third time, on Sunday morning, 27th of September, while returning to Maiduguri, Governor Zulum’s convoy was again attacked.

According to media reports, no one in the convoy was injured as security operatives deftly repelled the attack. Governor Zulum plied the Maiduguri-Baga route along with other government officials in charge of the resettlement of internally displaced persons.

The above findings adjudge the claim. It is true that Babagana Zulum has been ambushed 3 times.

If the attached video is not about Maiduguri. So where does it come from?

The ICIR conducted a deep search and realised that multiple Twitter accounts posted the same video on Twitter with captions about the attack on Governor Zulum. One of it is the popular GIDITraffic @Gidi_Traffic, an information hub with over 1.7 million followers on twitter.

The video posted by GIDITraffic, as at 12:29 am on Tuesday, September 29th has been viewed by over twenty thousand users, gathering 356 retweets 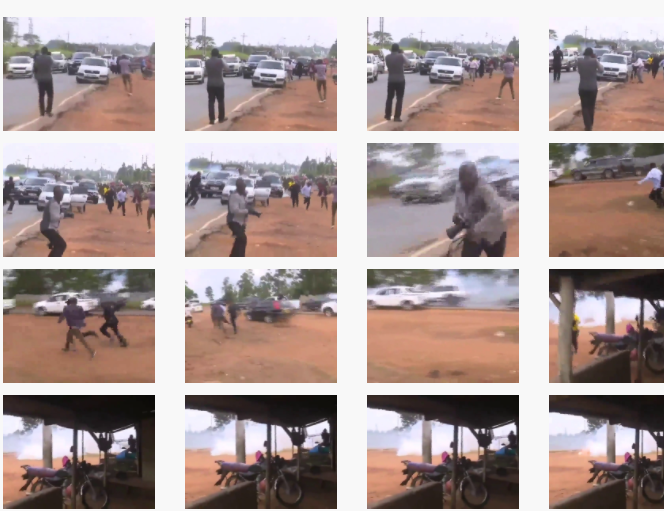 Google reverse image provided 4 results within 0.77 seconds. One of these results led to a Facebook post by King Fazul, a political page in Kenya, where the same video was posted on 18th January 2020 with a caption detailing an attack on Kenyans by state armed forces

“Is this what we pay our forces to do?? Instead of fighting terror attacks in Garissa County, they are wasting their time fighting with innocent Kenyan people, Shame on you Mr above”  the caption reads.

Further checks led The ICIR to a Youtube video uploaded by one Othaya GlobalNews to explain how leaders were tear-gassed in Mumias.

Mumias is a town in Kakamega County of Kenya. The town has an urban population of 116,358. Mumias was the centre of the Mumias District. The town is linked by road to Kakamega, Busia, Bungoma, Butere.

On that same day, KTN News, a media platform under The Standard group, publisher of The Standard Newspaper, one of Kenya’s largest newspapers and the oldest newspaper in the country, posted the same video on its youtube channel in a report that lasted for three minutes and forty seconds.

The report detailed how security operatives dispersed the crowd that gathered for the Building Bridges Initiative (BBI) meeting in Mumias town at Bukhungu stadium, Kagamenga county.

BBI is an initiative conceived by President Uhuru Kenyatta and opposition leader, Raila Odinga, in March 2018, to mark an end to months of post-election violence in the country.

A critical look at the number plate of one of the cars, as seen in the video, does not also conform in any way with Nigerian’s vehicle number plate. It is of a black inscribed text on a white plate/background while Nigerian is known for a white background with the Nigerian map in green and letters and numbers in blue.

While it is TRUE that Babagana Zulum, governor of Borno state, has been ambushed three times by the Boko Haram insurgents, intensive checks by The ICIR shows that the video attached to the post is from Mumias, Kenya.

The researcher produced this fact-check per the Dubawa 2020 Fellowship partnership with The ICIR to facilitate the ethos of “truth” in journalism and enhance media literacy in the country.