A Twitter user, Samson Adeyemi, recently posted four pictures purportedly depicting the victims of the latest attacks in Southern Kaduna and their aggressors.

Checks by Legit.ng through reverse image search show that two of the four photos posted have nothing to do with the Southern Kaduna killings. One of the other two photos appeared online earlier and does not show the latest killings.

As emotions run high on social media over the latest killings in Southern Kaduna, a Twitter user, Samson Adeyemi, posted four pictures purportedly depicting the aggressors and victims of the attacks.

Adeyemi with the Twitter handle @minesam_ on Saturday, July 25, posted the pictures with the caption, “Governor @elrufai  innocent souls are wasted in southern kaduna on a continuous basis and yet nothing is done.

“I’m wondering how you are able to live in that state and conveniently call yourself a governor with all that is happening. End southern Kaduna killings.”

Despite various efforts to restore peace, including deployment of military teams and regular imposition of curfew, killings in Kaduna State have continued unabated.

On Sunday, July 19, armed men stormed communities in Kaura Local Government Area, one of the local councils in the state, and killed at least 16 people, according to Premium Times.

Four days after, On July 23rd, The Punch reported that gunmen suspected to be Fulani militia invaded Agwala Magayaki of Doka Avong in Kajuru Local Government Area and killed seven persons, including an 85-year-old man.

Some residents were declared missing while several houses were razed during the attack, the newspaper notes.

The latest spate of killings led to outrage on social media as “END SOUTHERN KADUNA KILLINGS” trend on Twitter on Saturday, July 25.

The Twitter trend has generated over 3,000 tweets with several gory photos purportedly depicting the killings in the state as of Saturday, July 25.

Four of such pictures were posted by Adeyemi on Twitter. As of Wednesday, August 5, when the tweet was seen, it has been shared over 400 times, with over 400 likes and several comments.

Sharing old (gory) pictures/videos to represent the latest (violent) incident readily sets a stage for reprisal attacks, hence the need for a verification.

Reverse image searches show that two of the photos posted by Adeyemi have nothing to do with the Southern Kaduna killings.

The first picture shows fighters of the Islamist group Movement for Oneness and Jihad in West Africa (MUJAO) sitting in the courtyard of the Islamist police station in Gao, Mali.

The picture was taken on July 16, 2012 for AFP/GhettyImages by Issouf Sanogo and can be found in this 2012 BBC report and other places. 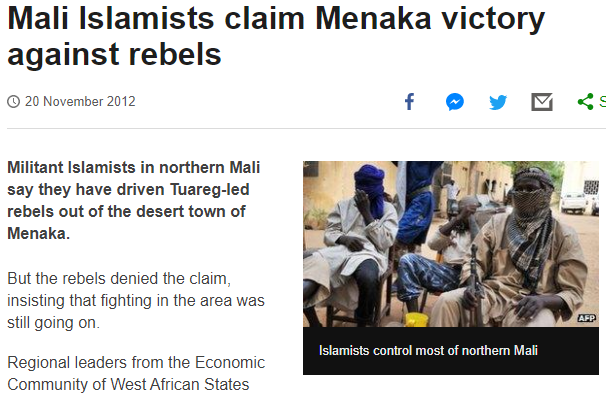 The second picture shows villagers “look(ing) at bodies of victims of religious attacks lying in a mass grave in the Dogo Nahawa village, about 15 km (9 miles) to the capital city of Jos in central Nigeria, March 8, 2010.”

It was taken by a REUTERS journalist, Akintunde Akinleye and can be found in this report by The New York Times in 2010. 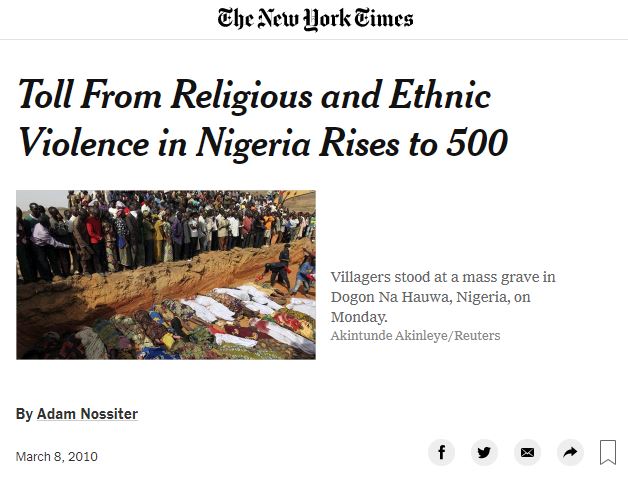 While Legit.ng could verify the immediate source of the remaining two photos via reverse image search, wayback machine, indicates one of them is not recent and does not show the latest violence, as it appeared online as far back as 2014 and can be found in this report.

The specific origin of the other one, however, remains unknown at the time of filing this piece on Tuesday, August 4. If you know where and when it was taken, you can contact us here.

The researcher produced this fact-check per the Dubawa 2020 Fellowship partnership with LegitNG to facilitate the ethos of “truth” in journalism and enhance media literacy in the country.