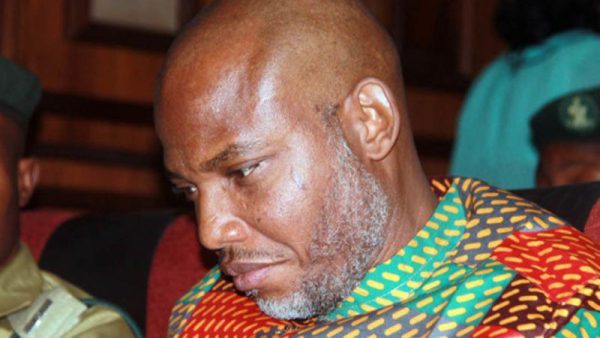 On February 28, some prominent Nigerians led by former Central Bank Governor, Charles Soludo, addressed a press conference where they demanded the release of Nnamdi Kanu, the leader of the Indigenous People of Biafra, IPOB, who has been in detention for over one year on allegations of treason.

Mr. Soludo’s group, Uzuku Umunna, which also included former presidential candidate, Pat Utomi and former chairman of the electricity regulatory commission, Sam Amadi, gave reasons for their demand; one of which is the alleged ‘illegality’ of holding Mr. Kanu in detention despite ‘court orders.’

“A situation where the state refuses to obey clear and legitimate court orders for his release and holds him until it gets a favourable order; moves the goalposts endlessly through endless amendment of the charges against him; and now seeks to try him in secret clearly constitutes circumstances that would fall well short of the constitutional guarantees of due process,” Mr. Soludo, who spoke on behalf of the group, said.

The call by the Uzuku Umunna is similar to that by other Nigerians who have challenged the federal government to seek better ways to resolve the Biafra agitation in the south-east; with many insisting Mr. Kanu’s detention is illegal as it allegedly violates court orders.

But, does his detention violate any court order?

Like Mr. Soludo, Mr. Kanu’s lawyer and indeed Mr. Kanu have reiterated that stance since an Abuja Division of the Federal High Court ordered his (Kanu’s) release on December 17, 2015.

Reacting to his continuous detention, Mr. Kanu and his lawyers accused several judges of refusing to toe the line of the December 17 judgement by Justice Adeniyi Ademola, in a bid to fulfil the aspiration of the current government.

“After Kanu was granted bail on December 17, the president was heard saying at the presidential media chat that he (Mr. Kanu) will not leave the prison cell for any reason. That bail was made known to Federal Government on 18th December 2015 but they failed to grant the bail,” said Mr. Kanu’s lawyer, Ifeanyi Ejiofor.

The defendants also filed various requests, both at the Appeal Court and the Community Court of Justice of the Economic Community of West Africa, ECOWAS, demanding that the judgements sanctioning the continued detention of Mr. Kanu be regarded as a flagrant abuse of the order made by a court of coordinate jurisdiction.

The argument by Mr. Kanu’s lawyer was that the defendant was granted bail by the court but was not allowed to enjoy the bail till the prosecution secured a contrary order from the same court.

The above excerpts from Mr. Soludo’s remarks regarding Mr. Kanu’s detention echoes the point of view of Mr. Ejiofor, and indeed the IPOB leader on the matter.

The first court ruling discharging Mr. Kanu was on December 16, 2015.

On December 16, 2015, a Magistrate Court in Abuja discharged Mr. Kanu, after he was first arraigned, following the withdrawal of the charges against him by the prosecution.

The Magistrate, Shuaibu Usman, struck out all criminal charges levelled against Mr. Kanu after counsel to the State Security Service, Moses Idakwo, filed for discontinuation of the matter on the instruction of his client.

Mr. Usman said since the SSS, through its lawyer, had filed for a discontinuation of the case, he had no option than to discharge the accused.

Mr. Idakwo had in that court hearing stated that further investigations by the SSS had shown that charges against Mr. Kanu could not be entertained by a Magistrate Court due to lack of jurisdiction.

A day later, a Federal High Court presided by Justice Adeniyi Ademola directed that ‘Mr. Kanu be charged to court or set free in the absence of a valid charge against him before a court of law’.

Delivering his judgement on December 17, Mr. Ademola hinged the grounds for his decision on the fact that the defendant had not been charged before a court of law.

The judge further said it was against the provisions of law for any party, including the state, to hold an accused captive for so long without a valid charge.

In other words, the judge said Mr. Kanu was to either be promptly released or charged to court.

A day after Mr. Ademola’s ruling, the federal government filed fresh charges against Mr. Kanu at the Federal High Court, in what appears an obedience to the court order.

The Federal Government filed a formal charge against Mr. Kanu on December 18, 2015. The new case was filed at the Abuja Division of the Federal High Court.

In that first charge at the Federal High Court, Mr. Kanu was accused of committing various offences bordering on alleged treason.

Reacting to the new charge, Mr. Kanu cast a vote of no confidence in the court, saying he preferred to remain in prison than to be subjected to a court hearing whose decision would not be respected.

Following Mr. Kanu’s remarks about the court, the judge, Ahmed Mohammed, recused himself from the matter, resulting in the transfer of the case file to the chief judge who then reassigned the matter to Justice John Tsoho, another judge of the Federal High Court, FHC, in Abuja.

On January 29, 2016 the court presided over by Mr. Tsoho refused Mr. Kanu’s application for bail, allowing his continued detention in prison.

On May 25, 2016, Mr. Kanu’s request to be granted bail at an appellate court in Abuja was also refused by a three-member panel of justices of the Appeal Court led by Abdul Aboki.

According to the judges, Mr. Kanu’s dual citizenship would increase the chances of him leaving the country, thereby jeopardising his case.

They also ruled that the allegation of terrorism earlier included in the charge against the defendants made it imperative that they should not be allowed bail.

On June 21, 2016, Mr. Kanu made another request for the replacement of Mr. Tsoho as  judge in his trial. The case was adjourned till September 26, when the first defendant reiterated his request asking that the judge be investigated.

In a petition addressed to the National Judicial Council and made available to journalists, Mr. Kanu said the conduct of Mr. Tsoho amounted to judicial rascality.

He cited the revocation of a previous decision against secret trial by the judge, as well as failure of the court to promptly avail the defence of court proceedings as grounds for the alleged offences in Mr. Kanu’s petition.

Subsequently, on that day, Mr. Tsoho withdrew from participating in the matter.

On November 17, 2016 Mr. Kanu made another request for bail after his case was transferred to Justice Binta Nyako’s court.

On December 1, 2016, the court refused Mr. Kanu’s application for bail yet again.

After his charge was amended to exclude terrorism allegation on March 1, Mr. Kanu again demanded to be granted bail.

The request, made at the FHC in Abuja, venue of his ongoing trial, will be decided on April 25.  There will be hearing on April 27 on a similar application pending at the ECOWAS court.

Mr. Kanu was first arrested on October 14, 2015 upon his return to Nigeria.

He was detained in the custody of the SSS until January 20, 2016 when the Federal High Court  ordered he be transferred to Kuje Prison where he has since remained.

While the continuous detention of Mr. Kanu may not be illegal and not in contravention of any court order, the calls by prominent Nigerians including the Uzuku Umunna, for a political solution to the Biafra agitation remains.

CONCLUSION: The Nigerian government is not violating any known Nigerian law by holding on to Mr. Kanu. His bail applications were refused, and the pending ones are yet to be decided.