Claim: There are some WhatsApp posts, Facebook accounts and Twitter handles claiming different names and bank accounts to photos of the same girl, soliciting financial support for a secondary school girl with a tumor.

Many of these posts are put up by scammers in a bid to fleece unsuspecting donors.

Miss Praise Oluwadamilola Olugola was born on August 22, 2003 to the family of Pastor and Mrs Olugola. A student of Acme Private School, Agbede, Ikorodu, Lagos State and Head Girl of the School.

Praise was preparing for WAEC when she developed an ailment known as sinonasal tumor. Unfortunately, in the family’s move to get funds for medication, 17-year-old Praise became a subject of scam.

Her father, Pastor Olugbenga Daniel Olugola, said the family had spent over five million naira and more still to spend as her left eye has been affected. She can only see with only one eye now.

While Miss Praise was in pain during this ailment, her pastor father was compelled to reach out to the public via social media for help as things got too hard and the family could no longer cope with the financial burden of getting medical treatment for her. 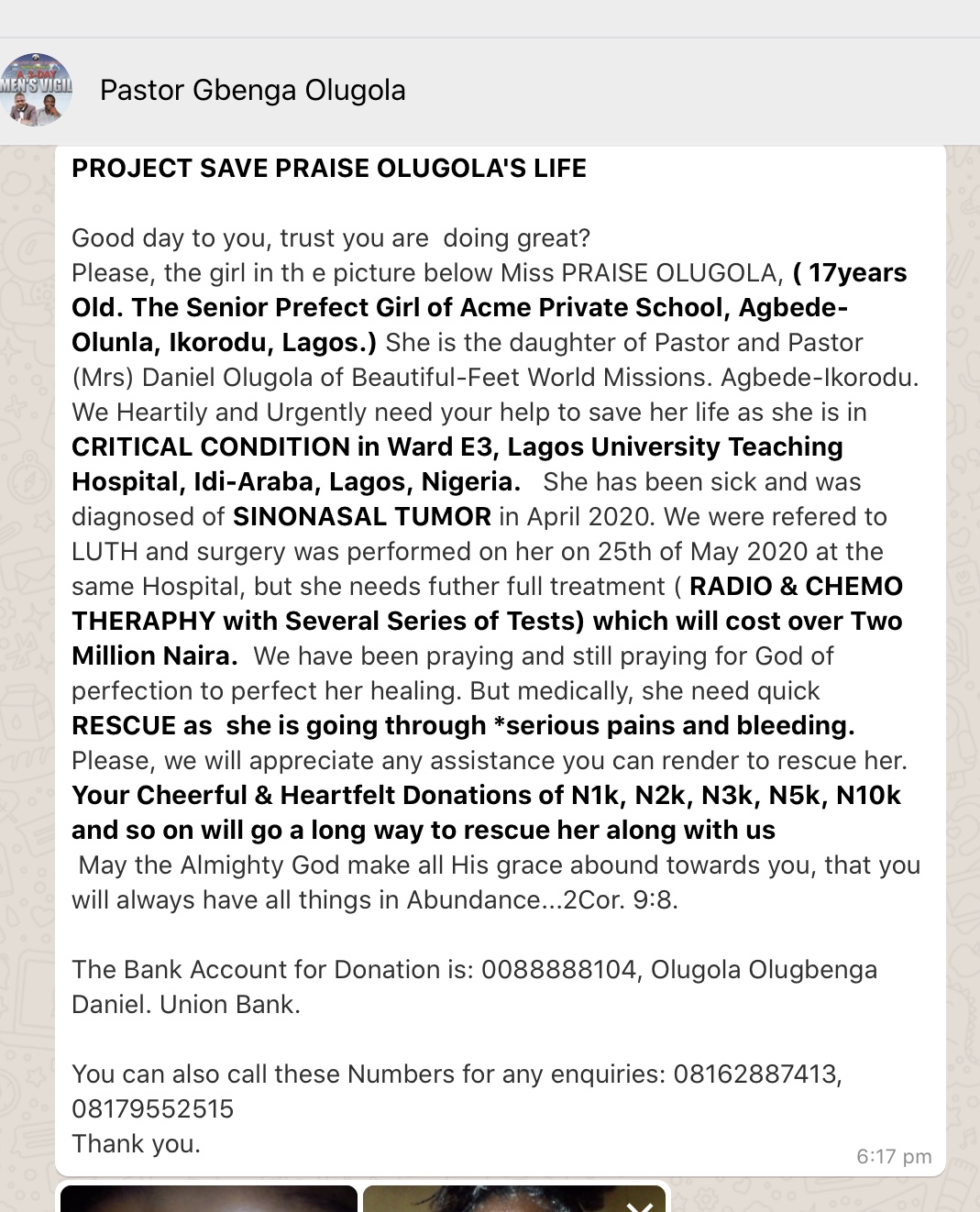 Photo: A screenshot of the original post from the father of the girl, Pastor Daniel Olugbenga Olugola.

Miss Praise’s courage, fighting spirit and the tenacity of her family paid off and she was able to undergo the first stage of the required surgery at Lagos State University Teaching Hospital, LUTH, courtesy of several donors who took interest in her plight.

While the donation was ongoing, however, some people unrelated to the family created fake social media accounts with the pictures of the girl but different names and account numbers to be credited for support. This move really foiled Praise’s further treatments, as some funds could have been diverted into fake bank accounts.

They have also been posting her photos and attaching fake names. The photos posted are Praise’s photos before her treatments.

These are some of the social media posts:

Facebook: This reporter was able to identify over twenty different posts pleading for financial support into different account numbers but with the same pictures of Miss Praise Olugola before her treatments. Few of such posts are below:

Someone even went to the extent of opening a Facebook account with the name Mary Abosede but with her pictures, soliciting for funds. While another person shared the post with the same name but different account number.

Twitter: One of the scammers’ Twitter handles, Nwankwo Emeka Precious @nwankwoemekapr3 went as far saying she is his cousin, posting a UBA account number to raise money.

WhatsApp: Also on WhatsApp, there were so many of such posts both on personal and group platforms. This reporter was able to identify four different posts on WhatsApp, pleading for financial support into different account numbers but with the same pictures of Miss Praise Olugola before her treatments. Few of such posts are below:

In an interview with the father of the girl in all of the posts, Pastor Daniel Olugbenga Olugola, this reporter discovered that the only correct name of the girl is Praise Oluwadamilola Olugola. This implies that all other posts with a different name but with the pictures of the girl are fake.

Pastor Olugola also confirmed that Miss Praise was born on August 22, 2003, meaning that she was around 17 in 2020 unlike all the other posts that stated 19.

The father showed the formation and gradual development of the tumor from March to May 25, 2020 when she did the first surgery in LUTH; noting that it was as if petrol was added to fire after the surgery in May, because it was after the surgery that it exploded and became this bad.

Pastor Olugola told this reporter that after the escalation, two major tests were carried out on his daughter, and it was discovered that the only available treatments for her in Nigeria was Chemotherapy and Radiotherapy, as the COVID-19 lockdown did not allow trying to fly her to India, a country believed to be best in surgeries like Sinonasal Tumor. Although her immuno test was sent by DHL to India for a second report, Praise had to undergo five cycles of chemotherapy, which she completed in November, and had her last Radiotherapy on December 30, 2020. She returned home in the first week of January 2021, after spending over six months in the hospital.

It was also discovered that all account numbers aside that of the father of the girl, which is Union Bank account number 0088888104, with the account name Daniel Olugbenga Olugola, are scams.

Also, the reporter got to know that the girl in the circulated pictures is no more in such a state as she has undergone chemotherapies and is now in better health. 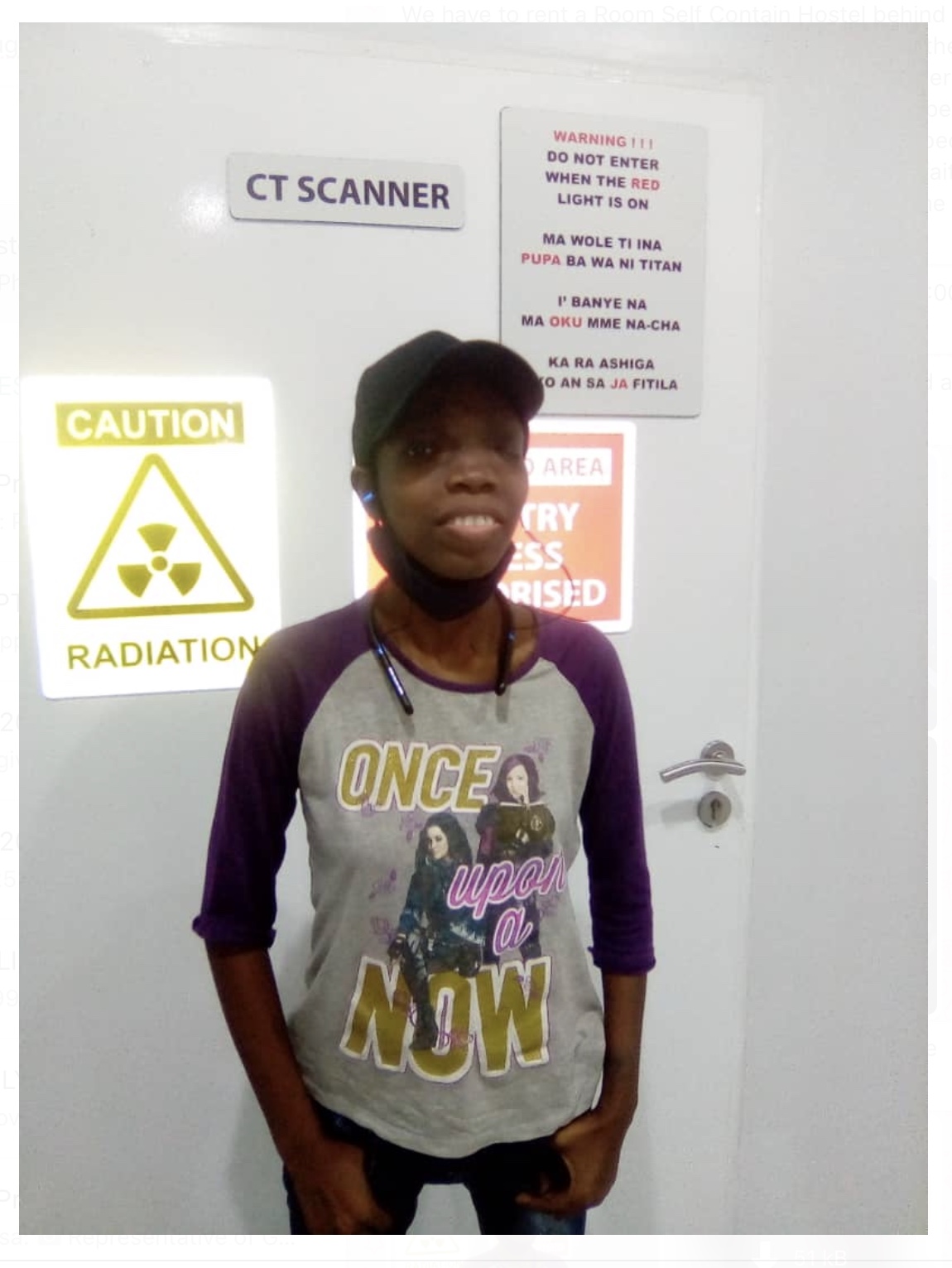 It has been discovered that all picture posts of Praise Olugola not carrying her name and/ or her father’s Union Bank account number 0088888104 are fake.

Also, Miss Praise is no more in the very bad state posted by scammers; she is now much better than she was in the year 2020 but still needs to treat her left eye which is presently unable to see.

The researcher produced this fact-check per the Dubawa 2020 Fellowship partnership with Broadcasting Corporation of Oyo State to facilitate the ethos of “truth” in journalism and enhance media literacy in the country.

Experts say consumption of zobo can lead to miscarriage

False! Atiku Abubakar did not stand in as groom’s father during Yusuf Buhari’s wedding