The #EndSARS protests in Nigeria will, beyond any skepticism, remain a  significant episode in the chronology of events in Nigeria.  However, what will even be more remembered is the eclectic discourses it has emitted and tons of controversies it has generated. One such controversy pertains to the death certificate in circulation on social media that is alleged to be President Buhari’s.

Threads of this claim have been largely shared amongst Twitter users; chiefly amongst them is MR. KEMS @alao-abiodunmr_kems4 who tweeted a death certificate containing President Buhari’s details. The certificate implied that President Buhari died in Abuja, due to a cardiac arrest on September 18, 2017, and was issued by the National Population Commission. The tweet piled up over 515 retweets, 30 quote comments, and over 548 reactions. 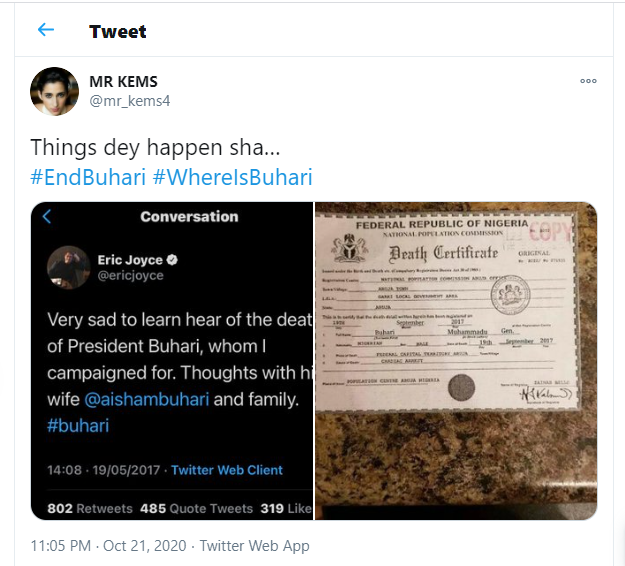 What seemed to have led to the claims was the long silence of the president over the recent Lekki toll gate shootings during the #EndSARS protest of some of the country’s youths. When the President would not  deliver a speech  24 hours after the Lekki  Gate shootings, social media became trendy with the tag #WhereisBuhari with some users asking for the whereabouts of the President and  demanding that he address  the nation via a live T.V.

“At this point I don’t know what to believe anymore loudly crying face I’m sure Buhari is not happy about what is going on wherever he is. Huncle Jib. has gone back to wherever he came from, living us in this mess he created and turned us all into a #MONSTER  the question is #WhereIsBuhari Aisha” Bertha @Bertha56897740 tweeted.  Odo Oqua @kahditzOqua further implied that “For those of you asking #WhereIsBuhari. HE IS DEAD!!! I’ve read about it and seen so many convincing evidence”. The #WhereisBuhari is still trending in the Nigerian Twitter space, with over 7, 000 comments and tweets tagged to it;  asking the question where is Buhari?

In 2017, alleged claims about President Buhari’s death became rife. The President who had been ill around that time was taken to a London hospital for treatment where he stayed for almost 6 months, during which rumors began to spread that the  President had died. At the time, Eric Joyce, a Scottish National who claimed to have campaigned for President Buhari, Tweeted a condolence message to the President’s wife, Aisha Buhari, and further remarked that a new president would be confirmed in a day or two to replace the departed Mr. Buhari. “The Acting President, I guess. He’ll be confirmed in a day or two.” Tweeted Mr. Eric.

When president Muhammadu later showed up in Nigeria,  diverse theories around his death were already in circulation. Some claimed he was cloned and  others contended that he was replaced with an imposter. The leader of the Indigenous Peoples of Biafra, IPOB, Mazi Nnamdi Kanu, alleged that the real Buhari was dead and that the person leading the country was ‘Jubril’ of Sudan whom Mr. Kanu claimed to be a lookalike of President Buhari. In one instance, Mr. Kanu shared two images of Mr. Buhari, one reversed, to allege that the Buhari Nigerians elected in 2015, who is right-handed, had been replaced by Jubril, who was left-handed.

Mr. Buhari, who was in  Poland, attending a UN Climate Change Conference at the time, dispelled the claims saying: “…somebody just thought I am cloned, ….it is real me I assure you”. His personal assistant further shared a video of the President’s response:

However, the recent upsurge of the #EndSARS protest gave rise to diverse criticism against the President over his absence on matters that many felt he could have acted faster: “ANY PRESIDENT OF A NATION WHO CANNOT COME OUT LIVE TO ADDRESS HIS PEOPLE, THAT PRESIDENT, IS DEAD”  Omo kiikan @Omokiikan tweeted. However, after he broke the silence with a 12-minute speech, critics alleged that the speech lacked empathy and did not address salient issues about the #EndSARS protests, such as the alleged  Lekki toll gate shootings.

As a result,   the social media took off with a new trend, #Buhariisdead, claiming that Buhari is dead and the real Buhari would have done better. A Twitter user,   Mazi Chiemerie Esiowu @ChiemerieEsiowu complained that: “His Address Should Be Titled ‘No Empathy Speech”. IT IS FINISHED Indeed! Nigerians Have Finally Realized They’ve No President. #EndSARS”

To back up such claims, social media users began circulating an Instagram post shared recently by Zarah Buhari, (now Mrs. Indimi). The post sparked a new round of controversy, as most users on social media claimed Mrs. Zarah was referring to her father, the purported late Buhari. Though Dubawa had confirmed that Mrs. Zarah actually made the post on her verified Instagram page, she is yet to respond to a direct message on Instagram in response to the claims or give an explanation of the post in question. 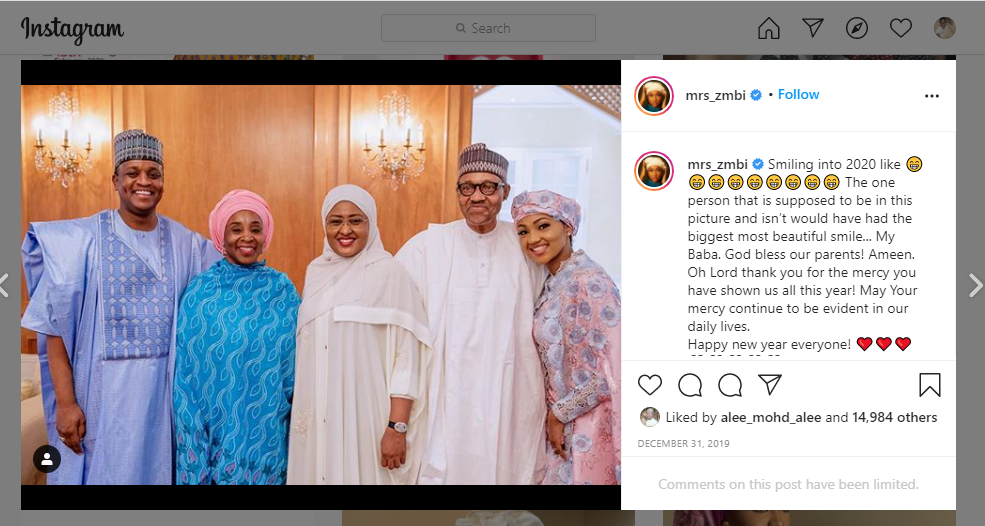 The death certificate, just like the President’s daughter’s Instagram post, is circulated by social media users to serve as proof of Mr. Buhari’s purported demise in 2017. However, DUBAWA launched an investigation to track the veracity of the claim.

Dubawa carried out a preliminary query to trace the source of the certificate and its history on the internet. Using InVid  (image/video verifying tool) reverse image searches,  the picture of the death certificate was traced to a defunct Facebook page called ‘Ohafia Political Forum’ where it was first shared in October 2018, by a certain Bishop Orieke.  The picture of the certificate was further shared multiple times; it attracted massive attention and appeared on different web platforms.  After an error level analysis was carried on the image, it turned out that the alleged death certificate was doctored. This procedure was neatly conducted and presented in the photocopied edition to conceal the procedure. Below are the results of the analysis: 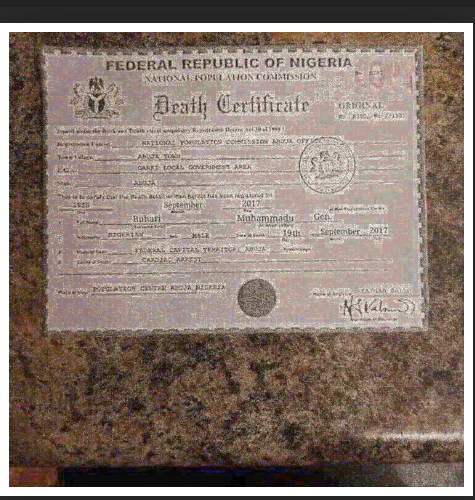 Notice how it was doctored 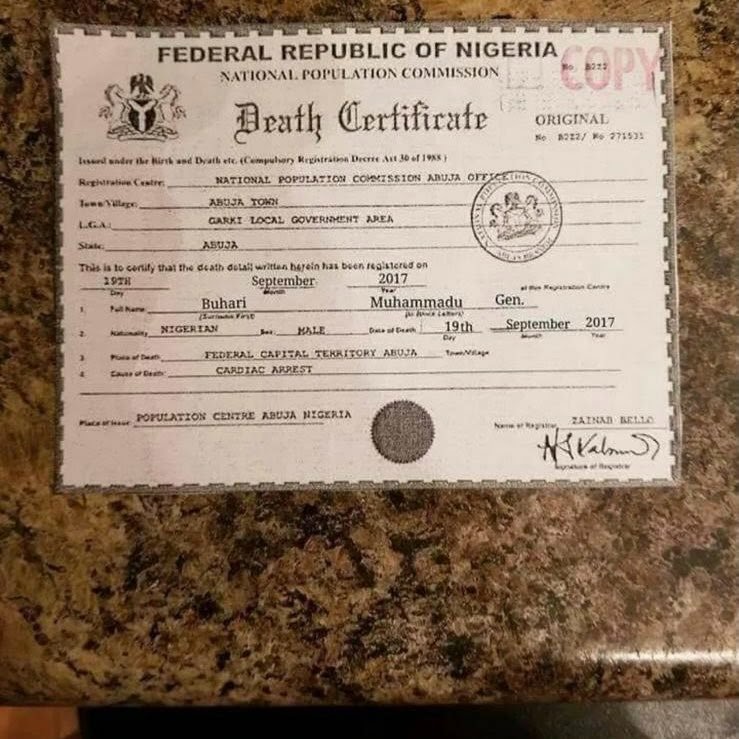 The above copies revealed how the certificate was doctored. Dubawa has made efforts to contact The National Populations Commission but there has been no response yet.   Besides that, in 2018, Bishop Orieke who first shared the image was brought before the office of the Honorable Attorney General of the Federation and Minister of Justice for peddling false information. The certificate of death of President Buhari currently in circulation was, like the one that surfaced in 2018, doctored and edited.   It has also been in existence since 2018. The certificate was merely resurfaced to suit the lingering narrative of his absence during a national crisis that the president should have spoken to the nation.