Will Using A Mobile Phone Close To Filling Stations Make It Explode or Ignite Fire? NOT AT ALL! 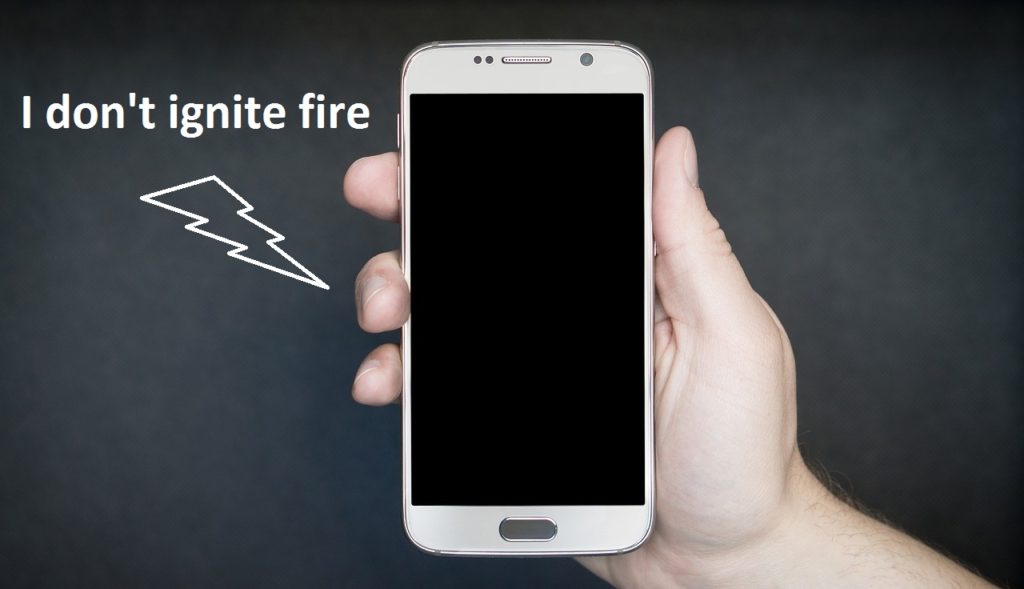 It is a common sight in most gas stations, fuel stations, cooking places to see the “switch off your phone” warning everywhere. Some believe that it emits heat; so when exposed to fuels, it explodes, and therefore ignites fire.

In some quarters, however, it is almost a common knowledge and widely held belief that the use of phones in the aforementioned places could cause the ignition of fire — not because of the heat though, but because of the radiation it emits.

Recently, the green field of WhatsApp became the playground for the spread of this belief yet again. In an audio that was accompanied by a picture showing a burnt gas cylinder, on the platform, the speaker faulted the use of phone by the victim as the reason the gas cylinder exploded.

The energies released by mobile phones are weak. Phones communicate with nearby mast in the transfer of messages passed through them using electromagnetic wave. This wave is regarded as very weak with “a discrete particle having zero rest mass, no electric charge and an indefinitely long lifetime.”

It therefore has no strength to cause fire.

INSTEAD OF PHONE, THINK STATIC ELECTRICITY

Static electricity is explained to be electric charges that are built up on an insulated body, often due to friction. Once the body is charged up, when in contact with fuels, it ignites fire. Hence, because the electromagnetic wave of mobile phones is weak to spark fire, it is believed that rather than these waves, the static electricity is the cause of such fires.

A study conducted by Steve Fowler and Jim Farr, a fire marshal from Gaston County, North Carolina, USA support this position. From it, it was discovered that static fire and human body can build up a static charge in different ways; one of which is by getting in and out of a vehicle.

“That voltage is enough to catch gas fumes on fire”, Fowler said. As for a mobile phone — or mobile phone battery — sparking a fire, Fowler and Farr say that it is theoretically possible but not probable.

NO KNOWN EXPERIMENT HAS YIELDED FIRE

According to the Petroleum Equipment Institute (PEI), there has been no documented report of a mobile phone starting a fire near a gas station or cylinder. In fact, many purposeful trials to prove this wrong have proved abortive.

EXPERT SAYS IT’S NOT SO

Idowu Farai, Professor of Radiation and Health Physics in the Department of Physics, University of Ibadan calls it “blatant falsehood”. He debunks the claim that the energy involved in GSM telephoning causes fire when used near inflammable objects.

“We must bear in mind that GSM signals (or GSM radiation) is in the radio frequency band,” Farai tells Dubawa, adding that, “as signals from the many radio stations in our locality and elsewhere on the globe. Radio-frequency is ubiquitous and hence, present in the kitchen and the petrol stations where we imagine GSM signals will cause fire.”

“In addition, all the domestic remote control and microwave systems used in communication and for cooking, also generate radiations in the energy range of GSM signals. If none of these gadgets have been known to cause fire, why should a GSM phone do?”

He equally said that the energies emitted by GSM “are thousands of times weaker than the ultraviolet (UV) radiation that makes the bulk of the radiation from the sun, called solar radiation. The sun ceaselessly emits radiation onto the earth surface. If the sun rays that enter your kitchen, shine on your generating sets or shine at petrol stations, have not caused fire, just how can GSM radiation of far less energy cause fire?”

Also, for a material to catch fire, its temperature must exceed its ignition point, “which is above 250 degrees for cooking gas and petrol.” However, says Farai, no mobile phone can ever be as hot as 40 degrees.

Also, he stresses the fact that when there is any possible hazard a new technology can cause, a warning instruction would be boldly displayed on such gadget. So, GSM manufacturers, being part of humanity, wouldn’t toy with human health and even if they do, “there are the WHO and the International Commission on Non-Ionizing Radiation Protect (ICNIRP) and Nigeria’s NCC to check them.”

“By the way, if it is possible to ignite the cooking gas with the small energy in GSM radiation, the technology would have since been extended to gas lighters such that by now, GSM gas lighters would have replaced the match sticks in the kitchen.

“On the issue of cancer induction, the simple reason why GSM radiation and similar radiation types cannot induce cancer is that there is a minimum energy which a radiation must have before it can disrupt a living cell and initiate health effects in humans. The energy in GSM signals is about one million times smaller than this minimum energy. If this were not the case, human race would have been wiped out by cancer induced by the 200 Watts per square metre solar radiation bathing us every day.

“The energy in GSM signal is millions of times smaller than the energies of x-rays or gamma used under strict regulatory control in both medical and industrial sectors. Whereas x-rays and gamma radiations have been established for decades as capable of disrupting living cells and causing cancer in humans, GSM is not known and may never be known to any reliable degree of certainty as capable of causing cancer. However, in order not to close the subject but give room for further research on the subject, WHO still classifies GSM radiation as possibly carcinogenic,” Farai concluded.

All experiments carried out to ascertain the truism of mobile phones igniting fire at gas stations prove the claim is false. Also, the power emitted by mobile is only about 40 degrees which is way less than the 250 degrees’ temperature at which fire ignites. In fact, the sun emits thousands of more energy than the mobile, yet it doesn’t ignite fire when it shines on fuel stations.

Therefore, the belief that mobile phones can ignite fire in gas stations is FALSE.