On Thursday, October 8th, President Muhammadu Buhari presented the 2021 budget estimate to a joint session of the Nigerian National Assembly. The budget expenditure was estimated at N13.08 trillion, the highest Nigerian budget so far (especially when compared to the previous 2020 budget of N10.59 trillion). Hours later after the presentation, the House of Representatives approved the total expenditure of the  N13.08 trillion 2021 budget, which covers the Medium Term Expenditure Framework (MTEF) and the Fiscal Strategy Paper (FSP). The 2021 budget is titled by the President as ‘Economic Recovery and Resilience’   aimed at promoting economic diversification and improving social inclusion.

Since independence, various government expenditure reforms have been implemented to raise and sustain the economic growth rate of the country. The public sector contributes to GDP growth rate through the provision of government services, such as education, health and administration, and productive activities in areas of agriculture, manufacturing, transport and communication, and trade. The government plays a leading role in determining the pattern of financing its operations through public sector reforms, which in turn determine how much of the country should borrow and how those resources should be allocated in order to enhance economic growth. The main government expenditure strategy has been restructuring and rationalizing overall expenditure. However,  amidst all this, the recurrent expenditure keeps rising in almost every Nigerian annual budget. According to the Central Bank of Nigeria (CBN), the Nigerian recurrent expenditure stood at N4.85billion in 1981, increased to ₦36.22 billion in 1990, then ₦127.63 billion in 1995. It was ₦178.10 billion in 1998. Then on return to democracy in 1999, there was an astronomical rise to ₦449.66 billion. In 2003, it stood at ₦984.3 billion to ₦1110.64 billion in 2004, and then almost doubled in 2008 at ₦2117.36 billion. In 2012, it was ₦4004.46 billion and rose to  ₦4892.36 billion in 2015, rising further to  ₦5762.7  billion in 2016 and to  ₦7138.7 billion in 2017.

The implication of Recurrent expenditure in the Nigerian budget

The 2021 budget presented by President Buhari includes N5.65  trillion recurrent expenditure, about 43% of the entire budget, plus personnel cost of N3.76 trillion, and debt service of N3.12 trillion. The trend in the budget appears to continue  rising; from 2011 to 2020 the cumulative Federal Government personnel costs–pensions, and gratuities rose to about N20 trillion, thus pushing the recurrent expenditure for the 2020  budget to N4.84 trillion (around 45% of the total budget). 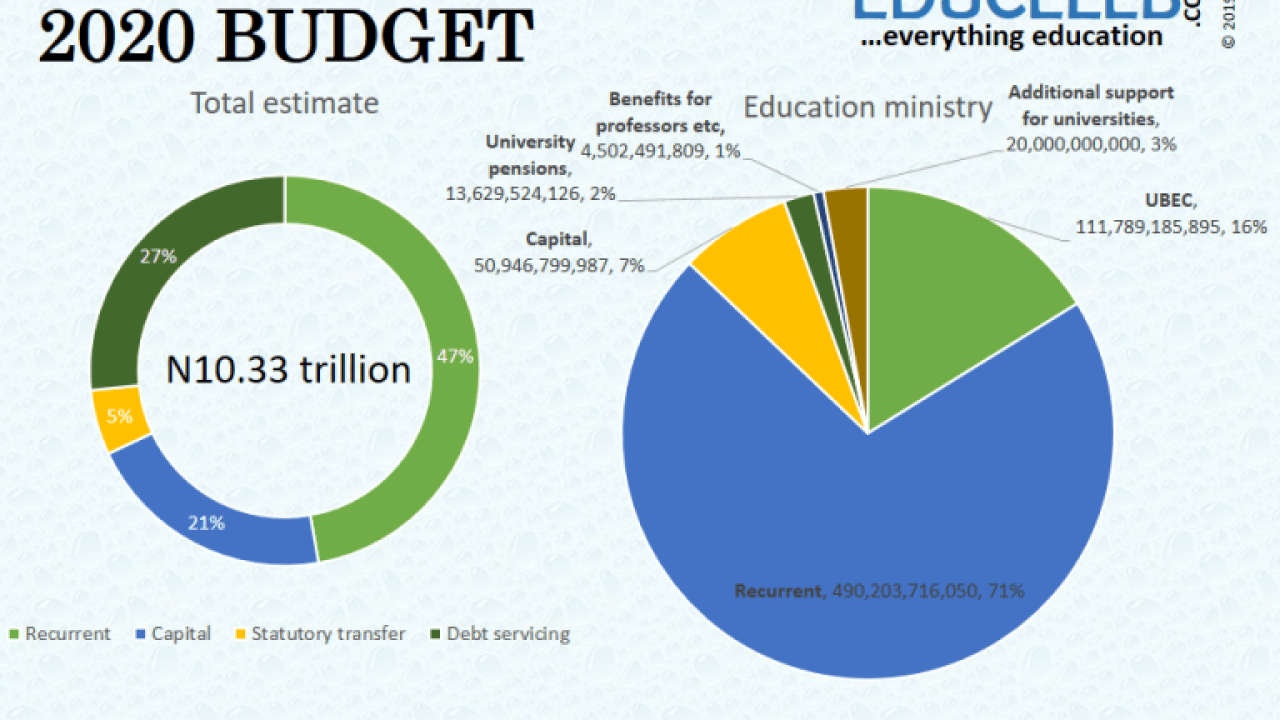 The recurrent expenditure continues to form a colossal part of the Nigerian budget, as it currently outstrips the capital expenditures with almost double its size.  Nonetheless,  some findings explained that this reality may not be the best for the Nigerian economy.

Impact of Recurrent expenditure on the economy

According to a study by the Nigerian Institute of Social and Economic Research on the rising government expenditure in Nigeria, “the only way to bring about a meaningful influence on the economy is to monitor and evaluate funds that are specially intended for capital expenditure and capital projects.” The study further implied that a budget with a higher capital expenditure than recurrent expenditure will always yield a better economy. This assertion was backed by another research carried out by a group of economic analysts on  “the empirical retrospect of the impacts of government expenditures on economic growth: new evidence from the Nigerian economy” published in the Journal of Economic Structures, the research revealed that “recurrent expenditures of government were found to be significantly impacting on economic growth in a negative way.”

Though another study also suggested the negativity of recurrent expenditure to the Nigerian economy, it also concludes that “we cannot simply measure effectiveness by “Capital” and “Recurrent,” the real measure is “impact” viz-a-viz costs. The Federal, State, and personal budget must have an impact as the key driver.”

According to Prof. Akpan Ekpo,  Professor of Economics at the Akwa Ibom State University, “it would be important for the government to increase its capital and recurrent expenditures, because of the need to stimulate consumers’ aggregate demand during the recession by enabling them to have money to spend. But there should be a more proportionate increase in capital expenditure than the recurrent expenditure. This will take care of the demand side. So, it is time for stimulus and not a time for austerity. Government has to pump money into the economy to reflate it.”

Similarly, Dr. Jakes Bomede of Department of Economics, Bingham University, further explained that “The trends in government borrowing and recurrent expenditure have tremendously increased in the recent years; if Government must borrow, it should borrow to invest into public projects that are growth-promoting in any part of the country without political coercion. Possibly there is an enormous lack of accountability of public expenditures by government officials especially in handling public borrowed funds and this could explain why recurrent expenditure components have always been seen to retard growth. Those who hold powerful positions should account for every kobo that is invested in any project. The More we borrow the more we pay higher depts servicing which amounts to large sums of money. This gives rise to recurrent expenditure which is not good for any economy because it attracts inflation, currency devaluation, and eventually poor foreign exchange rates. It perhaps explains why inflation in Nigeria has gone spiral within the years.”

These findings appear to send a warning over the rising trend of recurrent expenditure in Nigeria.

The President has already warned Nigerians about the likelihood of another recession with ‘adverse consequences’ and the 2021 budget also seems to carry such indications. According to the President, the deficit in the 2021 budget will be financed primarily by new borrowings totaling N4.28 trillion,  the highest loan so far in a Nigerian budget. The projected inflation rate at 11.95% and the GDP of 3.00%   in the 2021 budget is not a good sign and may only make the recurrent expenditure worthless because salaries and the general flow of money though may increase, will only pay for fewer goods and services.  In essence, when a high inflation rate meets with high recurrent expenditure the result is usually bad for any economy.

Is it true all former Oyo governors died at 71?