When Babatunde Olusola (known on Twitter as Shola, @jayyth3dope) sent a tweet about Nigeria’s former president, Goodluck Jonathan, on the 5th of May, 2020, using a parody account, little did he know he had signed up to spend “almost 90 days in detention.”

According to a thread of tweets he posted on August 21, he had converted his personal account into a parody and used it to respond to a question on the (Twitter)  timeline: “who else noticed Nigeria has been boring ever since Buhari became the president?”

“So I quoted the tweet saying “my wife was always the joke,” Olusola wrote.

“I only made a harmless tweet that very evening but unfortunately I got arrested May 23rd😩😩❤️,” he added.

He was subsequently arrested by Special Anti-Robbery Squad (SARS) operatives and whisked away from Ogbomosho to the Force Criminal Investigation and Intelligence Department (FCIID), Abuja, where he was kept behind bars for days before being charged to court for impersonation, according to his account.

This incident has brought forth heated arguments regarding the use of parody accounts on Twitter.

While many Nigerians, especially on Twitter, condemned the treatment meted out on Olusola, a few others believed he was wrong to have created the parody account and used it to “insult” the former president’s wife.

This brings to fore the arguments on the appropriate use of parody accounts.

Parody accounts on Twitter and other social media platforms are those usually named after popular personalities and organisations mainly for humorous or satirical purposes.

Twitter rules permit the use of parody accounts. However, there are certain requirements that must be met.

First, the bio of a parody account “should clearly indicate that the user is not affiliated with the subject of the account.”

“Non-affiliation can be indicated by incorporating, for example, words such as (but not limited to) “parody,” “fake,” “fan,” or “commentary.” Non-affiliation should be stated in a way that can be understood by the intended audience,” Twitter rules state.

Also, the account name, which is separate from the username, or @handle, should clearly indicate that the user is not affiliated with the subject of the account.

For instance, a parody account named after President Muhammadu Buhari should clearly state it is not an official page of the Nigerian president. 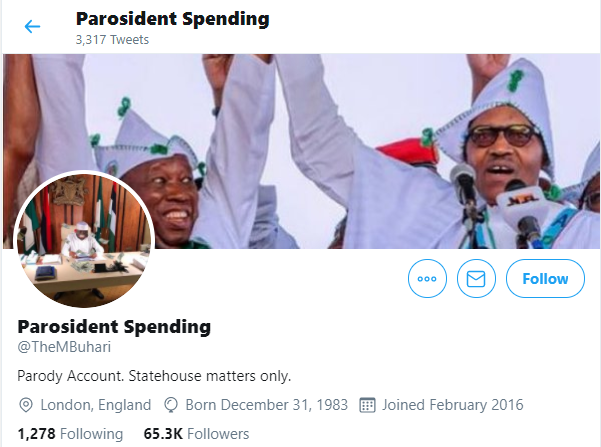 Not clearly indicating that such an account is not that of the president will amount to impersonation, a punishable offence under the law.

It could also cause misinformation, especially from the audience who might be misled to think it’s the president’s official page.

In 2018 for instance, a fake Twitter account named after Nigeria’s former vice president Atiku Abubakar, @TheAtiku, tweeted that the Nigerian politician thanked “the Association of Nigerian Gay Men (ANGAM)” for their endorsement of his presidential ambition.

Many Nigerians were misled, thinking the tweet was coming from the former vice president who was the presidential candidate of the Peoples Democratic Party (PDP) in the 2019 general elections.

The Twitter account has since been suspended. This could have been averted if the user had clearly stated the account was a parody and the tweets weren’t authored by Atiku.

In the case of Olusola, even though he indicated that the account does not belong to ex-President Jonathan in his bio, he didn’t indicate such in the account name (Goodluck E. Jonathan), in line with the Twitter rules.

Thus, the parody account in question, @jayythedope, also got suspended.

Owners of parody accounts that do not follow the stipulated guidelines earlier highlighted may be accused of impersonation, sued accordingly, and have their accounts suspended by Twitter.

Nevertheless, Twitter says it will not remove any account for impersonation if the “user shares your name but has no other commonalities, or “the profile clearly states it is not affiliated with or connected to any similarly-named individuals or brands”.

Parody accounts in the eyes of the Nigerian law

Olusola who created the parody account named after ex-President Jonathan was charged for impersonation under Section 22 (3)(c) of the Cybercrimes Act, according to Tope Akinyode, one of his counsels.

Akinyode says, however, that parody accounts cannot amount to impersonation under the Nigerian jurisprudence.

Specifically tweeting on the Olusola saga, the lawyer says “the requirement of the law is that Ex President Goodluck Jonathan must prove that Babatunde (Olusola)’s parody account has caused disadvantage to himself or other persons.”

Similarly, Inibehe Effiong, another legal practitioner, says “using a parody account is not impersonation except there is a fraudulent intention.”

Nonetheless, a Nigerian lawyer who is also remotely involved in the Olusola saga, Abdul Mahmud, says “parody account, distinguished from impersonation, is a grey area in our statute book.

Mahmud also advised against the use of people’s image without their consent.

“As I’ve always advised folks, please, don’t use people’s images if you don’t have their consents,” he added.

“However, if you do use the someone (sic) else’s image and name, don’t defame him or her. A joke can be defamatory.”

Meanwhile, controversies over the use of Twitter parody accounts are not limited to Nigeria alone.

In the United States for instance, a college student named Zachary Felton created a Twitter account to parody his professor, Todd Levitt. He named the parody account Todd Levitt 2.0 and used it “to make light of the plaintiff’s marketing strategy”.

In line with Twitter rules, the parody account’s bio stated that it was “a badass parody on our favorite lawyer”.

Upon discovering the parody account in June 2014, Professor Levitt sued Felton for defamation.

The court, however, dismissed the suit, issuing an order stating the parody was protected under the US’ First Amendment.

The First Amendment “guarantees freedom of expression by prohibiting Congress from restricting the press or the rights of individuals to speak freely.”

“The tweets were meant to ridicule and satirize plaintiff’s social media presence in a humorous way,” the court ruled.

“It is clear that Todd Levitt 2.0 cannot reasonably be interpreted as anything other than a parody account.”

Another popular and recent example is that of an American congressman, Devin Nunes, who in March 2019 sued Twitter and at least two parody accounts poking fun at him; “Devin Nunes’ cow” (@DevinCow) and “Devin Nunes’ Mom” (@DevinNunesMom).

The Republican congressman was seeking $250m (£188m) in damages for “abusive, hateful and defamatory” content.

However, in June 2020, the court dismissed Nunes’ defamation suit against Twitter, citing a United States’ federal law which protects social media companies from being held responsible for what individuals post on their sites.

Twitter also refused to reveal the identities of those behind the parody accounts, restating its “commitment to freedom of expression and privacy.”

While the social media giant has since suspended @DevinNunesMom, following a complaint by Nunes’ real mother, according to Independent UK, the other account, @DevinCow, remains active.

This article is a republished content from Legit.ng per our Dubawa 2020 Fellowship partnership with newsrooms and media organisations.