Claim: Farooq Kperogi, an associate professor of journalism, claimed in a tweet that “Nigeria is d 2nd most terrorized country on earth.” He also alleged that Nigeria is “d global capital of poverty”.

Also, the claim that Nigeria is the global capital of poverty is misleading. It appears to be based on outdated data from the World Poverty Clock which indicated that Nigeria overtook India as the country with the largest number of people living in extreme poverty in 2018.

On Tuesday, November 24, Farooq Kperogi, an associate professor of journalism and emerging media in the United States, posted a tweet with two major verifiable claims.

Firstly, he claimed that Nigeria is the second most terrorised country in the world.

Secondly, the university don alleged that Nigeria is also the global capital of poverty.

Kperogi was reacting to a statement by the Minister of Information and Culture, Lai Mohammed, that a report by CNN regarding the alleged killing of unarmed #EndSARS protesters could set Nigeria on fire.

“Lai Moh’d said CNN’s news report on d Lekki Massacre could set Nigeria “on fire.” But Nigeria is already on fire. You can’t set fire on fire. Nigeria is d 2nd most terrorized country on earth, d global capital of poverty, d haven of homicidal kidnappers, and a snake pit of cruelty.

Claim One: Nigeria is 2nd most terrorised country

The Institute for Economics and Peace (IEP) publishes annually the Global Terrorism Index (GTI) which “provides the most comprehensive resource on global terrorism trends.”

The index is based on statistics collected in the Global Terrorism Database (GTD) and other sources.

According to the 2019 report, Nigeria was ranked the third most terrorised country among a total of 163 countries, trailing Afghanistan and Iraq.

Though Nigeria retains the third spot, the GTI 2020 report indicates that “total deaths from terrorism in Nigeria fell to 1,245 in 2019, a 39 per cent decline, making it the lowest in the country since 2011.”

Based on the two cited reports, the claim that Nigeria is the second most terrorised country on earth is false.

Claim Two: Nigeria is the global capital of poverty

World Poverty Clock, developed by World Data Lab, “provides real-time poverty estimates through 2030 for nearly every country in the world”.

The project is funded by the International Fund for Agricultural Development (IFAD) and the Federal Ministry of Economic Cooperation and Development of Germany.

In 2018, a report by Brookings Institution, citing data from the World Poverty Clock, indicated that Nigeria had overtaken “India as the country with the largest number of extreme poor.”

At the time, Nigeria had about 87 million people in extreme poverty, compared with India’s 73 million, the report stated.

In 2019, data from the World Poverty Clock indicated that the number of Nigeria’s poor, that is, those living on less than $1.90 a day, had increased to 91 million as reported here and here.

However, Legit.ng on Sunday, November 29, discovers that the latest data from the World Poverty Clock indicates Nigeria now has about 88 million people (87,936,439) living in extreme poverty, a clear drop from the 2019 figure.

According to the data, Nigeria’s current escape rate from poverty is -5.8 people per minute. This implies that every minute, 5.8 Nigerians slide into poverty. 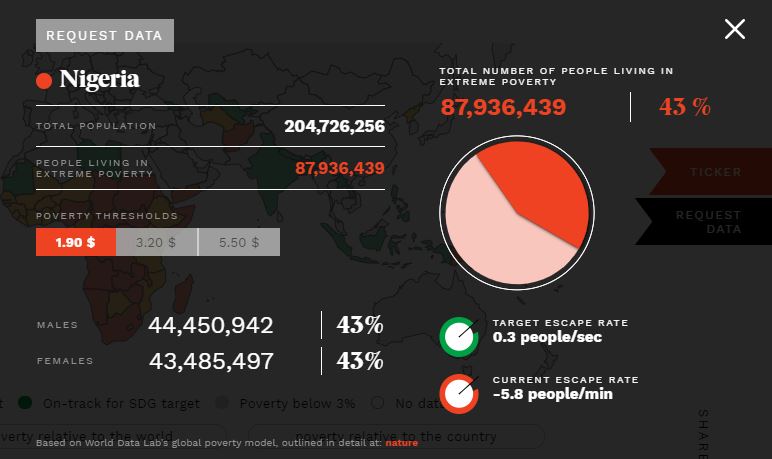 On the other side, the World Poverty Clock’s latest data on India puts the country’s current poverty figure at 130,341,506, far above Nigeria’s figure.

Further checks also indicate that World Poverty Clock’s data from 2018 have changed from the one cited by Brookings Institution in the same year.

World Data Lab, the owner of World Poverty Clock, is yet to respond to Legit.ng‘s email seeking clarification regarding the change in data.

However, the organisation stated on its website that the World Poverty Clock’s dataset was updated in November 2020, “taking into consideration the COVID-19 pandemic effects in the economy.”

Meanwhile, a fact-check by Africa Check published in October 2020, also noted that the most recent data on poverty by the World Bank puts India far ahead of Nigeria, “with 268.7 million people in poverty, compared to Nigeria’s second place of 84.7 million.”

When Legit.ng checked the World Bank’s data on Sunday, November 29, the figures for both Nigeria and India have slightly changed. While India’s figure increased to 284.6 million, Nigeria’s figure reduced to 78.5 million.

Also, the 2019 report on Nigeria’s poverty by the National Bureau of Statistics (NBS) states that Nigeria has 82.9 million poor people, representing 40.1 percent of the country’s total population.

The report classified poor Nigerians as those whose real per capita expenditures are below N137,430 per year. It, however, excludes Borno due to the difficulty in collecting data in the state which is under recurring Boko Haram attacks.

Based on the above, there is no evidence to support the claim that Nigeria is currently the global capital of poverty.

No evidence Kenya traveled with 87 athletes, 90 officials to Tokyo Olympics

COVID-19 VACCINE DOES NOT LEAD TO PENIS ENLARGEMENT

Claim that FG is offering N10,500 weekly as COVID-19 second wave grant is a fraudulent