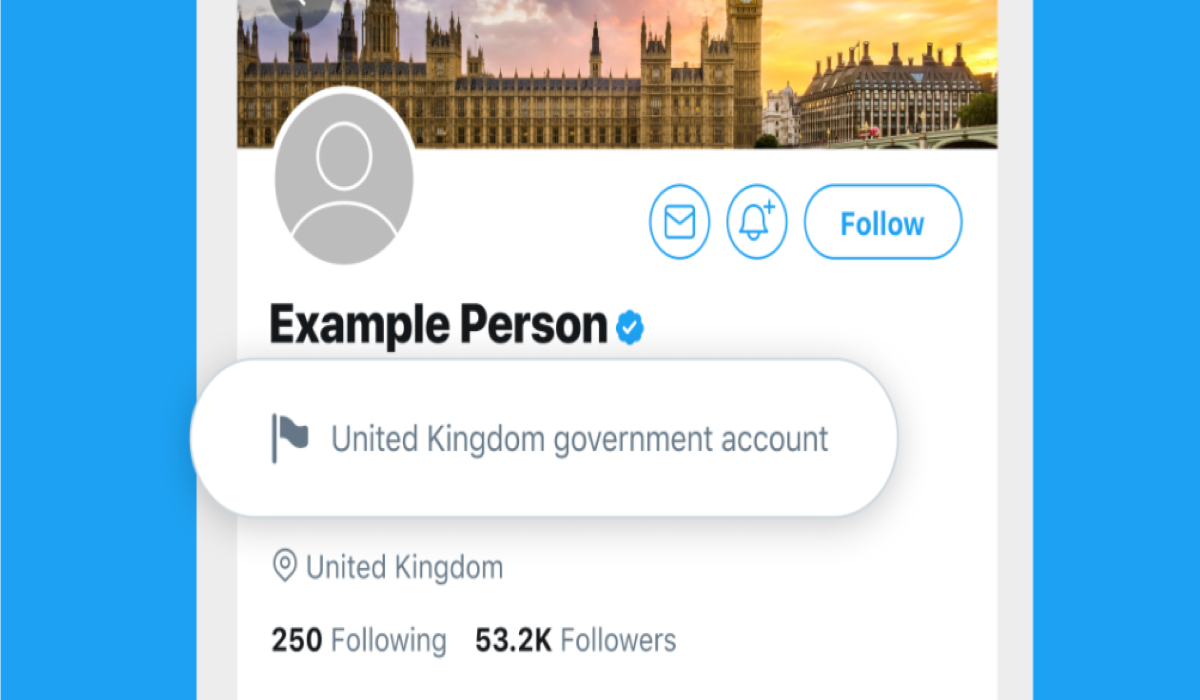 Twitter has continued to strive to control the flow of misinformation and propaganda on its platform.

From flagging coronavirus hoaxes and misinformation for users, banning all state-backed media advertising and political advertising from the platform to identifying some content as ‘manipulated media’, Twitter is continuously trying to make its platform free from misinformation and disinformation.

Relatedly, Twitter has rolled out a new feature which puts labels to identify government and state-affiliated media accounts.

According to a statement from Twitter announcing this new feature on Thursday, August 6, 2020, this feature is important in providing people with context so they can make informed decisions about the information they receive from these accounts.

The statement reads in part, “Twitter provides an unmatched way to connect with and directly speak to public officials and representatives. This direct line of communication with leaders and officials has helped to democratize political discourse and increase transparency and accountability. We also took steps to protect that discourse because we believe political reach should be earned not bought. In 2019, we banned all state-backed media advertising and political advertising from Twitter. Today we’re expanding the types of political accounts we label.

“We will add new labels to the following categories of Twitter accounts: Accounts of key government officials, including foreign ministers, institutional entities, ambassadors, official spokespeople, and key diplomatic leaders. At this time, our focus is on senior officials and entities who are the official voice of the state abroad. Accounts belonging to state-affiliated media entities, their editors-in-chief, and/or their senior staff.

Twitter has already started this rollout in China, France, the Russian Federation, the United Kingdom, and the United States. This feature is expected to extend to Nigeria and other countries.

“For transparency and practicality, we are starting with a limited and clearly-defined group of countries before expanding to a wider range of countries in the future,” Twitter also noted.

If this policy is expanded and eventually introduced in Nigeria, accounts that belong to politicians will come with a label indicating what they do or the office they hold.

This means that when you view the account, Twitter will let you know that these people work for the government.

This feature will also extend to state-affiliated media entities, their editors-in-chief and senior staff. Relating it to Nigeria, Twitter accounts of Nigerian Television Authority (NTA), The Federal Radio Corporation of Nigeria (FRCN), News Agency of Nigeria (NAN) will be labelled.

Twitter noted in the statement that it won’t label the personal accounts of heads of state, as these accounts enjoy widespread name recognition, media attention, and public awareness.

“At this time, we’re not labeling the personal accounts of heads of state, as these accounts enjoy widespread name recognition, media attention, and public awareness. Institutional accounts associated with their offices that changeover depending on election results will be labeled, however,” Twitter also said.

For the Nigerian market

Twitter, with this feature aims to  ensure that people take in information from these accounts with the full picture in mind. With a label, Twitter is telling you how to process any information by bearing in mind the perspective of the conveyor.

Fu’ad Lawal, the Editor-in-Chief of Zikoko, does not believe Nigeria is ready for this feature. “I’m curious to see how it plays out here especially regarding our culture around what is and isn’t affiliated media. It’s a standard Nigerian cultural problem where it’s like our reaction to any news that we feel like it panders to any interest. The reaction is always ‘who paid you’. I’m curious to see how Twitter navigates that in this market,” he said.

“To see how they navigate our own culture about how we think about media and affiliation unlike in America for example where it is pretty clear.”

“I think on the surface what this does is that it helps people to know where information is coming from; it gives some form of credibility,” Adeleke said.

“For example if something is coming from NTA, which they would tag affiliated media, you would know it’s true because it’s affiliated to the government.

“Unlike when it comes from Channels. People will still need to wait for confirmation from the government.”

Twitter is an ever evolving platform and with this feature, the Jack Dorsey led company is trying it’s best to help better the ways information is passed.