It is safe to say most people born into a Nigerian home are born into a thousand tales about things, events, animals. And some of such tales are false. Nigerian societies are full of tales passed down from generation to generation. The motives behind these stories (myths and folktales) were usually not to mislead but to teach children morals. Today, with the help of fact-checking, myths have been identified as wings with which fake news and falsehood fly around societies.

In one way or the other, a lot of Nigerians have heard about the legendary football match, the one between Nigeria and  India where the latter allegedly beat Nigeria 99 to 1. That is India – 99, Nigeria – 1. Legend has it that before Nigeria scored its only goal, the balls were turning into different creatures (fire, lion, stone) preventing the Nigerian team from kicking them. Samuel Okwaraji, who later risked his life to score a goal for his country, lost his life in the process. Consequently, FIFA banned India from soccer. Although there are variations of the story, the central meaning remains intact.

This story has thrived for so long and for some reasons many people seem to have accepted it as true. Dubawa created a Twitter Poll which saw the participation of 226 people. The poll was created to identify the level of awareness of respondents about this topic and it turned out that only 7.5% of the respondents were not aware of the supposed game while the remaining 92.5% said they have heard about it.

While this story has thrived for so long, most of the 132 respondents, in another poll,  said it’s false while little but significant others thought it to be true. 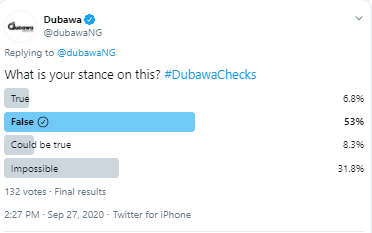 Nonetheless, Dubawa sought to research the topic and lay out the facts. We analysed the story and picked  out the claims:

A Keyword search revealed some articles suggesting that the match never happened.  Also, we couldn’t find any footage of the event.

Further, we reached out to popular Influencer and Sports Analyst, Godwin Enakhena who has written about this before and was happy to share his findings with Dubawa. He said, ‘I have written about this before, there was never a match like that. And the only reason India doesn’t play ball is that they don’t know how to play. They have never qualified for the world cup; they only play within Asia. If you follow them,  you will find out that they are playing football in Asia; they are not just good enough to compete beyond Asia.’

While answering questions on why he thinks the story thrived for so long,  Mr Enakhena said, ‘you and I don’t read, we don’t read at all and we don’t bother to do research. Nigerians don’t make good use of their access to the internet, instead of using it as a medium to get information. Nigerians believe everything and anything. No investigation. You don’t need to ask anybody, google it and the information is there.’

Further proving this game never existed is this 2018 publication – a vox-pop by BBC Pidgin. This video shows Nigerians narrating the same story, saying how it happened. Also captured in the video are Indians who claimed they never heard about such a game.

Was India banned by FIFA?

Recall that the story claims that FIFA – The Federation of International Football Association – placed a ban on India for displaying magic during the supposed match. While many still have doubts about the veracity of this claim, what seems to still validate it is the fact that India has been absent from the World Cup Tournament for a very long time.

But why has India been off the radar? Dubawa’s findings show that since the first World Cup Tournament was held in Uruguay 1930, India only qualified for the World Cup Tournament once – 1950.  And this was because, with the only slots available from Asia,  Philippines, Indonesia and Burma who also got the invites withdrew before the qualification round, leading to India automatically earning a spot. After a while, India also backed out and this exit has been a subject of controversy.

While some have said it was because FIFA has refused India to contest barefooted, others believed that the nation couldn’t afford to take its team to Brazil where the I950 Cup was hosted. However, The Sun attributed the exit to expensive travel costs and valuing the Olympics over the World Cup. Similarly, according to an India Times publication, Sailen Manna who would have led India in the tournament, said that the AIFF – All India Football Federation – did not take the World Cup as seriously as the Olympics.

In 2014 during an interview with Indian Express, 88-year-old Ahmed Khan, the only surviving member of the 1950 Indian team stressed that “Had India participated in the 1950 World Cup, it would have had a positive impact on the development of football in the country. Playing against world-class footballers would have motivated us to improve our standards, which would have paved the way for younger players to emulate players of my era.”

In contradiction to the claim that India’s absence from the World’s Tournament scene was due to the acclaimed Nigeria vs India game and the alleged ban by FIFA, Dubawa’s findings show that India had its chance once but did not take it and now, 70 years later, India is yet to play in the World Cup tournament.

How did Samuel Okparaji truly die?

A keyword search led to an August 12th, 2020 article by Nairaland suggesting that it’s been 31years since Samuel Okparaji died. Interestingly, a comment on the post linked the death to the Nigeria and India game as it sought for the veracity of the story. The article asked if the match truly happened or it was just a folklore. This further attests to the virality of the story and how much the name, Samuel Okwaraji triggers the ageless football story.

was an icon…i remembered that match like it was yesterday, the little me was with my uncle watching that match live in surulere and i gat the feeling that all wasnt well on the pitch because of the reactions of his team mates that came around and even the medics sad reactions and its normal to play down the incident till after the match..

continue to rest in peace a football legend on and off the pitch..

bt pls nairalanders help me address that India vs Nigeria match that ended 99-1, did that match really happened or was just a folklore??…

am asking because if its really a lie, that means its the 2nd heaviest scam ever in the history of Nigeria followed by the “CHANGE” we were all promised…

While the timeless tale has continually portrayed Samuel Okwaraji as dying from kicking a huge stone, magically, poised as a ball, against all odds, to give Nigeria its first and only goal in the game, Vanguard has written in 2015 that, “The sad event occurred on a tension-soaked Saturday, 12th August 1989, during a make or mar Italia 1990 World Cup qualifier match, between the Green Eagles and the boastful Angolan side. The pulsating encounter was held at the now pathetic and rickety National Stadium, in Surulere, Lagos. Okwaraji collapsed in the 77th minute of that match and later died at age 25 of congestive heart failure.‎ An autopsy showed that he had an enlarged heart and high blood pressure.”

Supporting Vanguard is the report by the News Agency of Nigeria, republished by PremiumTimes, validating the claim that Okwaraji died during a game but not the one between Nigeria and India. Samuel Okwaraji, born on May 19, 1964 ‘slumped during a World Cup qualifying match in Lagos between Nigeria and Angola on August 12, 1989, and later died in the hospital.’

As it is, the Nigeria vs India match remains a myth. If it ever happened, media publications about the event  would not have found wanting in archives as it is today. There would have been published highlights from the event as we have for other games. Not to forget that all the variations of the story do not state where the match took place, whether within or outside Nigeria. And this practice has frequently been flagged as a method devised by fake news purveyors to cover their tracks.

It’s 2020, a time to start unlearning old habits through research. Granted that everyone is susceptible to misinformation, there are ways to verify to check the veracity of every claim before making a conclusion or sharing unverified information with others.

Yes, Ondo Council Chairman Bought 4 Tyres; BUT Did Not Commission It!

COVID-19: At resumption, Nigerian universities pledged to keep students safe, how have they kept this promise?

Does waxing or shaving of woman’s pubic hair cause microscopic trauma?