Recently, some Twitter and Facebook users shared pictures of flooded airport premises and claimed they were images of the newly commissioned Akanu Ibiam International Airport in Enugu.

FALSE. The above photos are misleading and do not portray the current state of the airport.

On September 2nd 2020, a Facebook user, Afamefuna Nwokafor, posted some pictures purported to be pictures of the newly renovated Akanu Ibiam International Airport to a private group.

The pictures were accompanied with the tag, “your new renovated Enugu international airport after yesterday’s rain, it has become Ngwa road Aba”

The group named Igboist (by Maria Ude Nwachi) has at least 1.2 million members and the post has been liked over a thousand times. 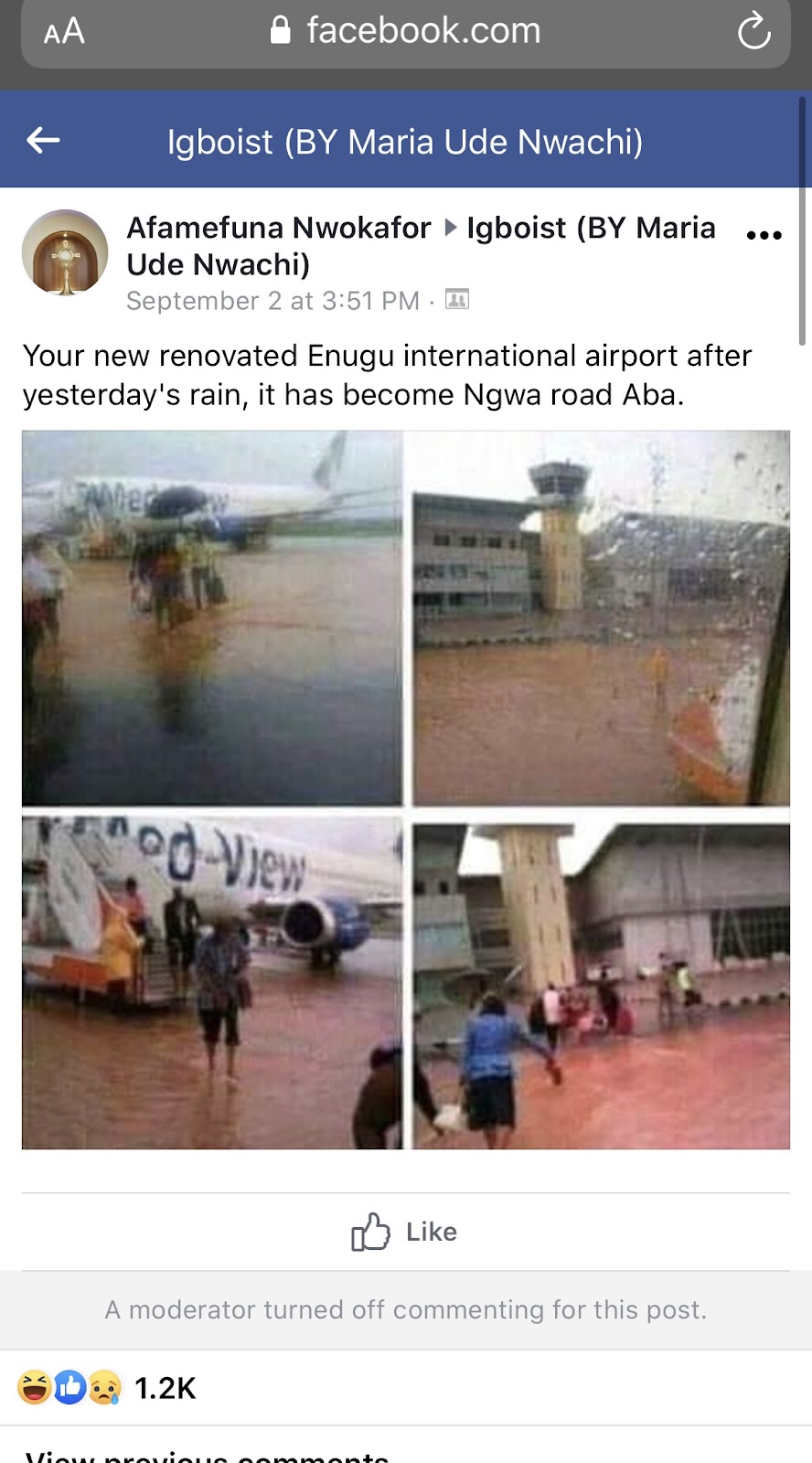 The exact photos were equally shared on twitter by Ikechukwu Igbokwe Chijoke @no David_Igboke092 with the caption, “This is the supposed newly renovated international airport in Enugu (Enugu state) after yesterday’s rain. Who’s fooling who” it’s been retweeted over 400 times and has been liked by 200 people.

The post was greeted by an array of opposing views. While some took the opportunity to berate the government, others countered the author, tagging the post as ‘fake news.’

A Facebook user by name Annie Ikebude with tagged the tweet fake news. “Why are you people bent on spreading fake news,” Annie questioned.

On the other hand, Benny Adindu agreed with the tweet.

This user replied, “They should simply tell us they have closed up the airport, cos the airport wasn’t like this when it was opened, now look at it, one Nigeria indeed.”

To verify these photos, Dubawa ran a check on TinEye, a reverse image search engine. Results from the search indicate that the photos have been on the internet since 2014.

One of the earliest times the pictures appeared on the internet was when bellanaija.com posted them on Thursday 21st August 2014, to depict the  recently renovated Akanu Ibiam International Airport, shortly after it was flooded.

Passengers can be seen carrying their luggage on their heads as they made their way through the flooded area. But that was in 2014.

On the 30th of August 2020, the Minister of Aviation, Hadi Sirika and FAAN posted the photos below of the runway and other parts of the airports.

The claim by some social media users that pictures of flooded airport premises depict the current status of the newly renovated Enugu international Airport is false.

The researcher produced this fact check under the auspices of the Dubawa 2020 fellowship to facilitate the ethos of truth in journalism and enhance media literacy in the country.

NO, WAEC Did Not  Release Ranking For Best Performing States In Nigeria For 2019

Will touching Naira notes increase the risk of Coronavirus?

COVID-19 Scams: How to spot suspicious links and ‘fake’ giveaways