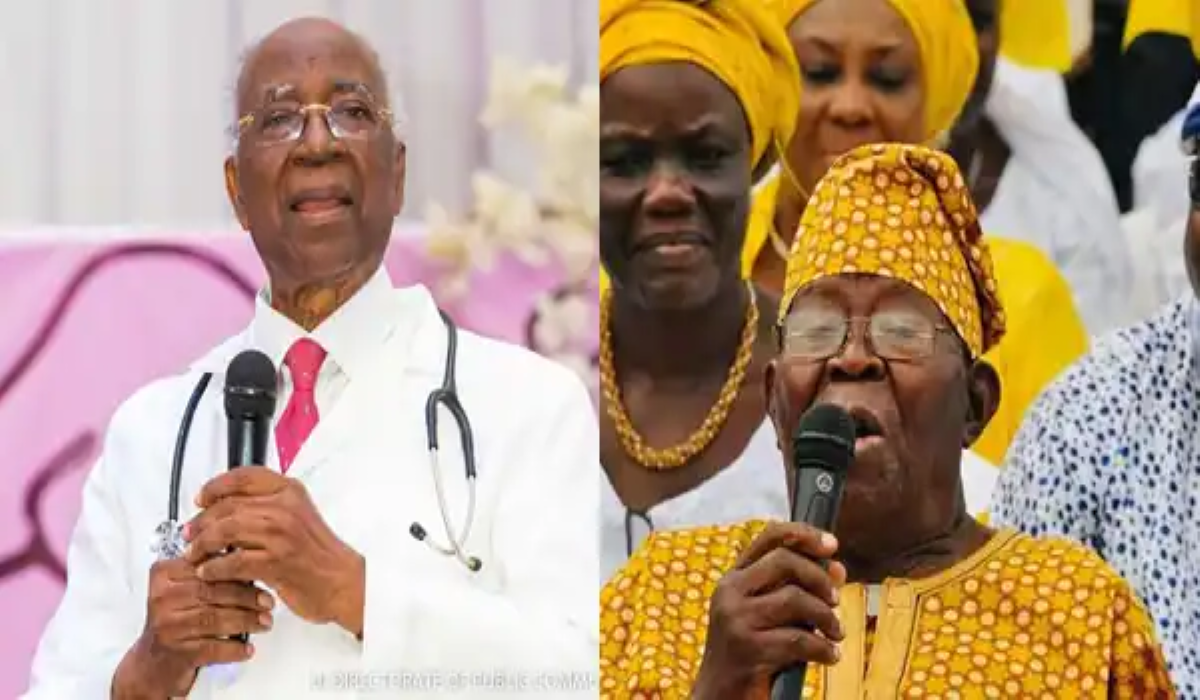 True, Professor Theophilus Ogunlesi is the first professor of medicine in Nigeria.

The governor made this claim in a tribute to Ogunlesi on the occasion of the celebration of his 98th birthday.

Governor Abiodun, while showering a flurry of encomiums on the nonagenarian claimed that Ogunlesi “has set Ogun State on the global map, where other states envy.”

He further added that Ogunlesi set up “principles that impact society positively.”

“I felicitate  with Emeritus Professor Theophilus Ogunlesi on his 98th birthday. Professor Ogunlesi deserves to be celebrated today, not just for enjoying the rare grace of clocking the age but for living a life dedicated to setting up principles that impact society positively.

“Amongst others, Prof’s status as Nigeria’s first Professor of Medicine has set Ogun State on the global map, where other states envy.

“I am delighted to wish Professor Ogunlesi a memorable birth anniversary, with prayers of renewed strength,” the full text read.

Ogunlesi: a beautiful shining star of the golden generation

Without any iota of doubt, Emeritus Theophilus Ogunlesi has put his feet on the sands of time in the field of medicine as a pedagogue in the Nigerian academic space spanning decades as a mentor and medical practitioner.

Born on July  12, 1923, the nonagenarian is one of the leading lights of Nigerian education.

Ogunlesi’s status as a stellar star of Nigeria’s golden generation was shown in President Muhammadu Buhari’s heartfelt tribute to him on his 98th birthday where he was described as a man who “had spearheaded the training of generations of Nigerians, many of whom became vice-chancellors of universities, ministers of health, and distinguished medical professionals in Nigeria and across the globe.”

However, a finding by Dubawa shows that Ogunlesi is not the only Nigerian to be called the first professor of medicine in Nigeria as another Emeritus professor, late Oladipo Olujimi Akinkugbe, was widely referred to as the first Nigerian to reach the pinnacle of academic rank in medical studies.

For instance, in its publication of July 15, 2020 announcing Akinkugbe’s demise, Vanguard newspaper described the late physician as “the first Professor of Medicine.”

In its own report, The Guardian also announced Akinkugbe as the first professor of medicine.

Often referred to as ‘Prof’ or ‘Baba’ (father), Akinkungbe (DPhil, FRCP, CON, CFR, FAS) who died on Monday, July 15, 2020, was a distinguished professor of medicine at the University of Ibadan.

He, according to the Royal College of Physicians, was a pioneer in the speciality of hypertension and nephrology in Nigeria and across Africa.

His university undergraduate education began at University College, Ibadan and was completed, as was the practice then, at the London University where he took his medical degree in 1958…

His academic career at Ibadan had started in 1965. He had a meteoric rise and was promoted to Professor of Medicine in 1968 at the age of 35. He served as the Dean of Medicine from 1970-1974 and Head, Department of Medicine briefly in 1972.

He had the distinction of having been one of the few, not just in Nigeria but in the whole of academia, to have concurrently held the positions of Head of Medicine, Dean of Medicine and Acting Vice-Chancellor at some time, the citation read.

In a citation by Kidney International, Akinkugbe was hailed for “pioneering work in the speciality of hypertension and nephrology, not only in Nigeria … but also across Africa.’’

According to GCI Museum, an organisation archiving relevant information (written, audio & visual docs) about the School, Old Boys, Akinkugbe was referred to as “the foremost  professor of medicine to be appointed by an African university.’’

He was said to have contributed to the medical literature, having written over 100 journals and served as the editor of numerous journals.

Despite his enviable erudition, Dubawa’s findings show that late Emeritus Professor Akinkungbe was not the first professor of medicine in Nigeria but  Theophilus Ogunlesi.

According to Sagamu Club, a socio-cultural group in Ogun State, he was inspired for the medical profession by R.L Oluwole, a son of bishop Oluwole, who recommended him for a scholarship after his program at the Yaba Higher College in 1942.

Ogunlesi started on the path of the medical profession in 1947 through the Yaba Medical School. And in the quest to improve his medical qualification obtained in Nigeria, he went to the University of London in 1953 and subsequently qualified as a medical officer in Britain registered in England.

The nonagenarian physician was conferred a medicine professorship by the University of Ibadan in 1965 four years after joining the institution’s department of medicine.

He took after pioneer professor Alexander Brown and three others who were from Britain when Ibadan was to host an annex of the University College of London in 1948.

Ogunlesi’s ascension to the status of professorship followed his enviable career from an assistant medical officer at the Nigeria Medical Department between (1947-48) and a medical officer of the Western Nigeria Civil Service (WNC) between 1950-56.

Meanwhile, according to the official University of Ibadan (UI) website Akinkugbe became professor of medicine in 1968 at the age of 35 after a meteoric rise in lecturing –three years after Ogunlesi was conferred a medicine professorship.

In an interview with The Sun newspaper dated January 18, 2017, Professor Ogunlesi narrated his journey as Nigeria’s first professor of medicine.

I joined at a time when Ibadan (UI) ran mostly by expatriate teachers. So, I was one of the first Nigerian lecturers in Medicine. That’s why I became the first Nigerian Professor of Medicine at the University of Ibadan,” he said.

Both Professors Ogunlesi and Akinkugbe tower high in the history of academics in Nigeria in respect to medical studies. They trained the first generations of medical doctors in the country including the former minister of health, Professor Isaac Adewole. However, records show that Ogunlesi is the first professor of medicine in Nigeria contrary to the claims backing Akinkugbe Abiodun.

The researcher produced this fact-check per the Dubawa 2020 Fellowship partnership with Legit.ng to facilitate the ethos of truth in journalism and enhance media literacy in the country.