The claim that Hon. Ibrahim Abuna representing Konduga, Mafa & Dikwa in the House of Representatives is throwing cash at his people as a form of empowerment is TRUE.

The member representing Konduga, Mafa, & Dikwa Federal constituency of Borno State, in the House of Representatives, Engr. Ibrahim Abuna BUR BUR (APC), was alleged to be the person in a 25 seconds video making rounds on social media especially WhatsApp groups and Twitter, where cash is seen to be thrown at a group of people from a balcony and the people beneath scrambling to get their share.

Dubawa began its verification using Google Image search with the name of the honourable to see any similarities between him and the man in the video.

Search returned a Facebook page of the legislator from Konduga, Mafa, Dikwa Federal Constituency, Borno State, with 2,598 likes. It contains several pictures of the member representing the above-named constituency with the name Engineer Ibrahim Abuna. 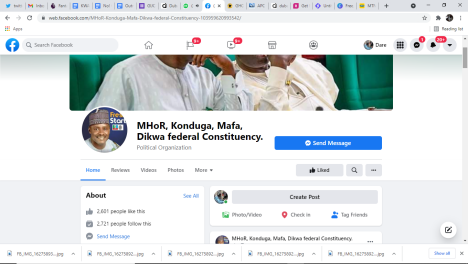 Further search on the Facebook page revealed a post on July 19, 2021, with several pictures and a caption stating “Engr. Ibrahim Abuna BUR BUR member House of Representatives, representing Konduga, Mafa and Dikwa federal constituency distributes cast (cash) to thousands of his constituents who gathered at his residence.

The honourable was seen distributing cash to several people in different pictures wearing the same cloth as the man seen in the viral video wearing a grey Kaftan throwing money at people from a balcony.

Several Pictures of Hon. Abuna handing out cash to his constituent

Further search on Google revealed an online news medium Trojan News which prides itself as an exceptional groundbreaking news outfit that strives on eliminating grand grafts through citizens reporting in Africa and the global community. 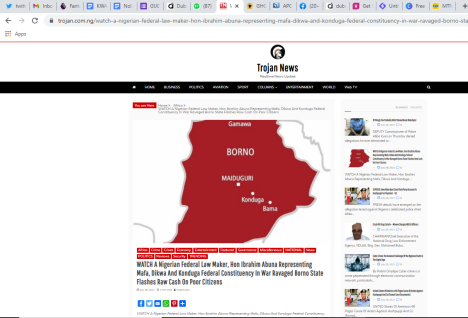 Screenshot of Trojan news page talking about the video

Sahara reporters and another Twitter user Eniola with the handle @eniolaofLagos also posted the video on July 29, 2021, while the post by Sahara Reporters garnered a total of 3,454 views, 97 Retweets, 6 quoted tweets and 119 likes within five hours of posting with numerous users condemning the acts. The post by @eniolaofLagos garnered 125 views.

Given the evidence available, it is true the member representing Konduga, Mafa and Dikwa Federal constituency of Borno State, in the House of Representatives, Engineer Ibrahim Abuna, threw wads of cash at supporters as claimed.