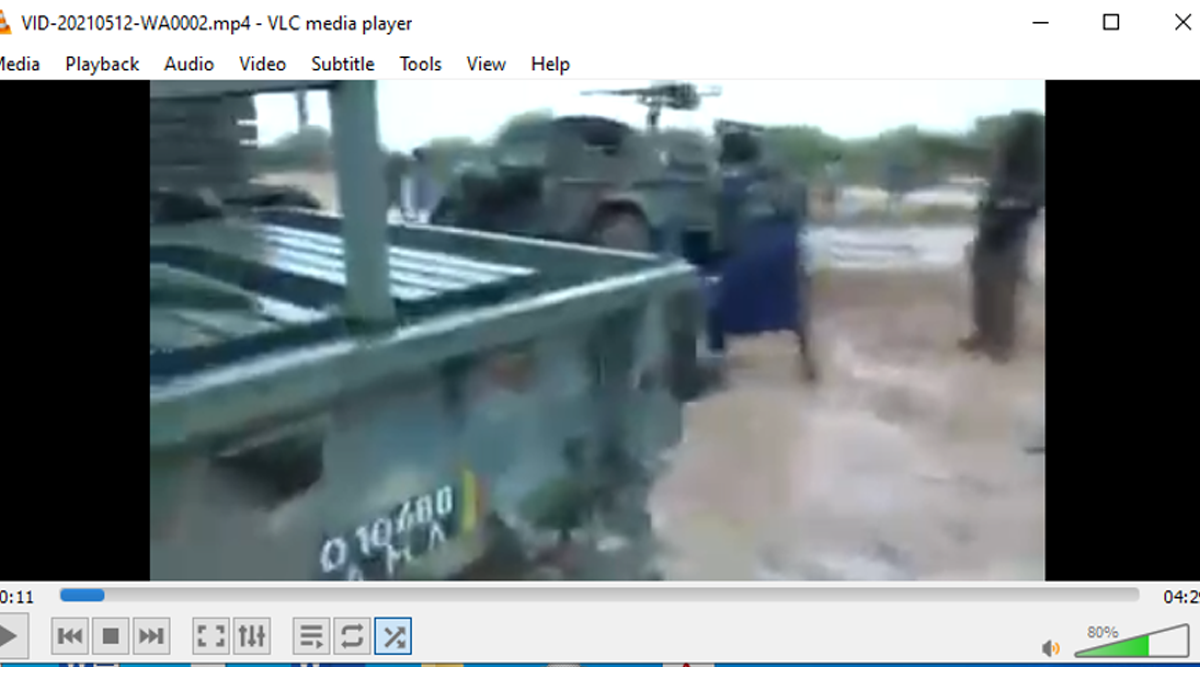 CLAIM: A viral video showing bodies of dead soldiers has been passed round as Nigerian soldiers killed by Boko Haram insurgents in a recent attack.

Nigeria’s struggle against insurgency remains one of the major conflicts in the sub-region. Despite efforts by the military to contain the insurgents, attacks have continued, leading to the displacement of millions and the death of over 30,000 people in northern Nigeria, including security forces.

A recent resurgence in the activities of Boko Haram and other Islamist terrorist groups has seen increased attacks targeted at Nigerian security forces. About 30 soldiers were killed in April in four attacks by Islamist militants in northeast Nigeria, a report said. In the same month, the terrorists hit and overran a police station in Damasak, Borno. state.

A video which has been forwarded many times on WhatsApp, as indicated by the messaging App, shows the lifeless bodies of soldiers mutilated by bullets. It was shared with the message “boko haram killing Nigerian soldiers,” suggesting the video to be a video of Nigerian soldiers killed by Boko Haram insurgents in a recent attack.

In the 4:29 minute clip, the insurgents are seen walking around chanting “Allahu Akbar”, as they carted away rifles, bulletproof vests, and ammunition, previously belonging to the dead soldiers. The quality of the video is poor and blurry, suggesting degradation from repeated sharing across different platforms.

Dubawa also found the same video, albeit a shorter version, shared on Twitter by one Anderson Micar with the caption: “Boko Haram kill Nigeria Soldiers like chicken. I wonder what type of arms Nigeria military is using to fight them. Maybe stones and sticks.”

DUBAWA analyzed the video on VLC, a media player, using the sigma filter tool to sharpen the video since it was blurry and of poor quality, as well as the slow-speed tool, which aided in capturing the images in the video.

With the use of both tools, which improved the quality and visibility of the images in the video, DUBAWA observed that the license plates of some of the military trucks in the video bore the national colours of Mali – green, yellow and red. This suggests that the trucks and of course, the dead soldiers, are of the Malian Army. The license plates of two  trucks spotted in the viral video reads: 010680 AMA and 010676 AMA.

DUBAWA conducted a Yandex reverse image search using a snapshot of one of the trucks in the video, and found Malian Army trucks bearing deep similarities (license plate, camouflage colour scheme) with the ones in the video, including some from the events of the 2020 Malian Army coup.

A keyword search also confirmed that the trucks in the video are indeed of the Malian Army [FAMA – Forces Armées Maliennes].

DUBAWA discovered that Nigerian soldiers, as well as the Nigerian Army trucks use a unique camouflage scheme which differentiates it from the Malian Army and other Armies in Africa.

This fact-checker also found that the group that attacked and killed the soldiers in the video could not have been Boko Haram insurgents, as they do not operate in Mali. The attackers in the video are most likely members of Jama’at Nusrat al Islam wal Muslimeen (JNIM), Islamic State Greater Sahara (ISGS) or any other terrorist groups active in the francophone country.

The video was taken from an attack on Malian soldiers by insurgents in Mali, not Nigeria.