Claim: A Twitter user, Nnamdi Chife (@NnamdiChife), claimed in a tweet that Anambra state is owing “a combined debt of over N200 Billion”.

Chife also alleged that Peter Obi (former Anambra governor) handed over N72 billion in cash and $150 million in Anambra Generational Fund to his successor, Willie Obiano, adding that all have been “frittered away”.

The claim that the Anambra state government is owing over ₦200 billion is false. The combined worth of the state’s debt according to the Debt Management Office (DMO) is ₦100.7 billion.

Also, the claim that Peter Obi left ₦72 billion in cash and $150 million in Anambra Generational Fund, with all “frittered away”, is mostly false.

The former governor in a 2018 interview said he left about ₦30 billion and $156 million in cash (not ₦72 billion). Even the former governor’s claim has been questioned by the Obiano government.

On Sunday, January 10, a Twitter user named Nnamdi Chife (@NnamdiChife), claimed in a tweet that has since gone viral that the Anambra state government is owing a combined debt of over ₦200 billion.

He also implied that all what the former governor left had been squandered.

“I am incredibly heartbroken.

“Anambra State is owing a combined debt of over N200Billion !!!

“Peter Obi handed over this state to Obiano with N72Billlion in cash and $150M in Anambra Generational Fund.

“All frittered away, broken infrastructure, debt, and profligacy.”

To verify this claim, Legit.ng first reached out to Nnamdi Chife to understand the source(s) of his allegation. 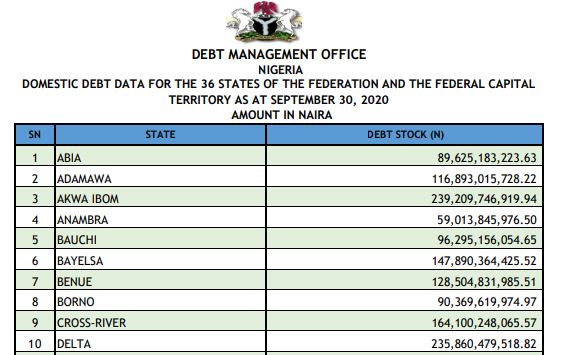 From the above, the total debt owed by Anambra state government is ₦100.7 billion.

Where did Chife get his “over 200 billion” debt figure from? He told Legit.ng:

Asked for evidence to back up this claim, the Twitter user said:

“The Access Bank facility is an insider information. The loan is collateralized (viz) with Anambra USD Generation Fund that was set up in the then Diamond Bank.”

To verify this allegation, Legit.ng checked the Anambra state government’s website for any relevant document.

According to a document on the portal tagged Anambra Debt Sustainability Analysis and dated December 31, 2020, the state government indicates it is owing a total of N85.197 billion outstanding debt: N40.561bn external, N44.636bn domestic.

Though there is no evidence to back up the alleged new Access Bank loan, if the N50 billion is added to the official debt owed by the Anambra state government, either the DMO figure (N102.9 billion) or the one on the state government’s website (N85.197 billion), the total figure will still be far away from “over N200 billion” claim.

Based on these findings, the claim that the Anambra state government owes over ₦200bn debt is false.

Claim 2: Former Governor Peter Obi handed over ₦72 billion in cash and $150 million to Governor Willie Obiano which have all been “frittered away”

Peter Obi handed over to his successor, Willie Obiano, in 2014.

About a year after, 2015, the Secretary to the Anambra state government, Prof Solo Chukwulobelu, granted a press conference to address an allegation that Peter Obi left ₦75 billion for his successor.

Chukwulobelu described Obi’s claim as a hoax, according to a Vanguard report.

“The N75 billion was not there; it was not handed over to anybody. At best it can be half truth”

Chukwulobelu said instead, the state government inherited a total contract sum of N185.1 billion as liability from the Obi administration.

“In the real sense, what the Obiano administration inherited from Obi was N9billion cash and 26 Billion near cash.”

However, reacting to Chukwulobelu’s claim, Obi’s media aide, Valentine Obienyem, clarified that Obi left “over N75 Billion in cash and investment”; not in cash alone.

In a 2018 interview with The Sheet TV, Obi revisited the issue. He said he left for Obiano local and foreign cash and investments in shares and bonds worth ₦75 billion.

Breaking down the ₦75 billion, Obi said he left about ₦30 billion in the bank. In foreign currency, he said left a total of about $156 million. The former governor added that he left investments worth ₦25 billion.

Beyond the claims and counter-claims (with varying figures) made by Obi and the Obiano government, Legit.ng cannot find any publicly available data to verify the actual amount left by the former governor for his successor.

Nevertheless, findings above indicate that the claim that Obi left “N72 Billion in cash” and “$150 million in Anambra Generational Fund” is mostly false.

#EndSARS: The Trend And Threat Of Fake Social Media Accounts