A popular Nigerian Twitter user posted a tweet claiming the Federal Government is “constructing a 27.3-kilometre perimeter fence for University of Maiduguri at the cost of N64bn”.

Although news reports suggest the claim that the Federal Government is constructing a 27.3-kilometre perimeter fence at the university at the cost of N64bn is false, there is no sufficient evidence to support the reports.

A popular Nigerian Twitter user, Deji Adeyanju, posted a tweet on Saturday, August 1, claiming the Muhammadu Buhari-led Federal Government is “constructing a 27.3-kilometre perimeter fence for University of Maiduguri at the cost of N64bn”.

The tweet reads: “The most corrupt Govt on earth led by the Chief Looter -Buhari says it’s constructing a 27.3-kilometre perimeter fence for University of Maiduguri at the cost of N64bn. That’s about N2bn per kilometer.

“We have suffered so much. The PDP guys were not corrupt. They were saints.”

The tweet has been shared 295 times and liked 493 times with several comments as of Saturday morning, August 1. 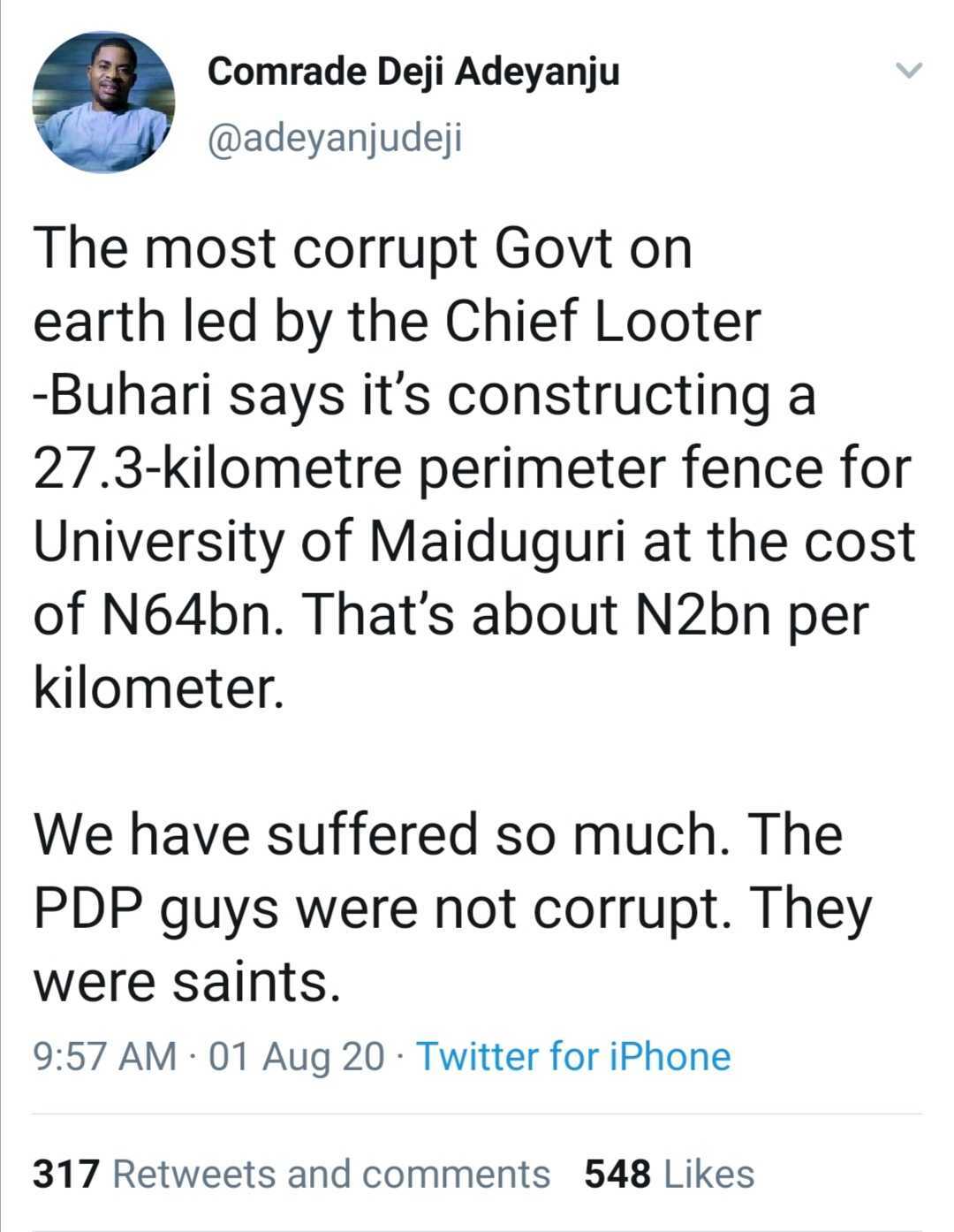 Located in Maiduguri, the capital of Borno state, Nigeria’s epicentre of the Boko Haram insurgency, the University of Maiduguri, often called UNIMAID, has experienced at least 10 suicide bomb attacks, with several persons killed.

In 2017, the chairman of the Academic Staff Union of Universities (ASUU), UNIMAID chapter, Dr Dani Mamman, appealed to the Federal Government to approve funds for the construction of perimeter fence round the university to protect it against suicide bombings.

“We advocate for the immediate construction and fortification of the perimeter fence which is porous and easily accessible by the misguided suicide bombers.

“In this regard, we implore the Federal Government to give special consideration to the management’s request for funds for the project,” Mamman said, according to a report by Vanguard.

He also urged the government to approve the request of the management for the procurement of modern security equipment to ensure security at the university.

Legit.ng reached out to Adeyanju on Saturday, August 1, via Twitter Direct Message (DM) for a proof of the claims he made in the tweet. He is yet to react to the message as of Friday, August 21.

However, Legit.ng conducted a keyword search which linked the claim to a report dated Friday, July 31, by The Punch, with the headline, N64bn UNIMAID fence. 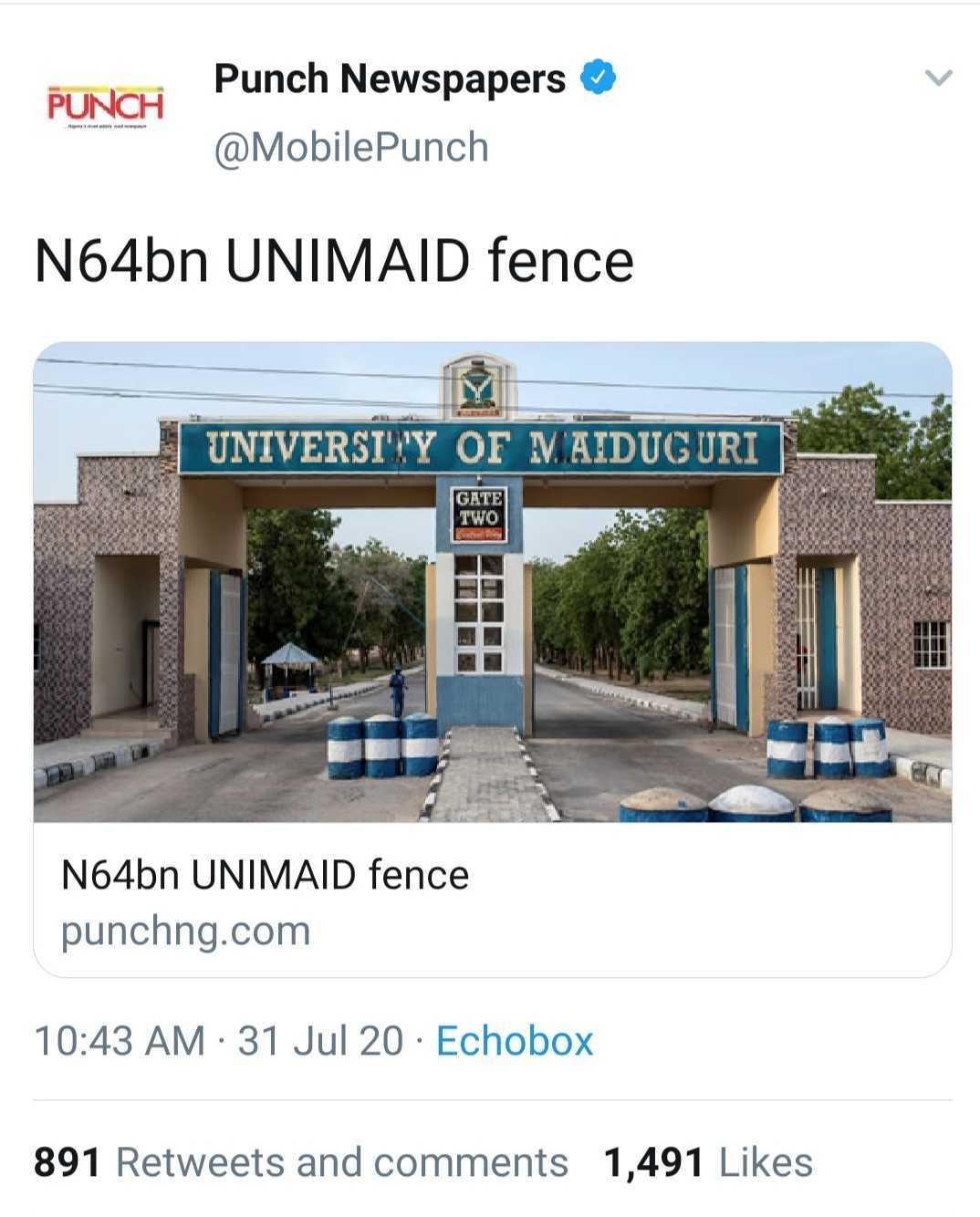 In the report, the newspaper stated that the “Federal Government has begun the construction of the 27.3-kilometre perimeter fence for the University of Maiduguri to check incessant attacks by Boko Haram terrorists.”

It also claimed that the project is “valued at N64bn,” attributing the reported amount to UNIMAID’s ASUU chairman, Professor Dani Mamman.

“The UNIMAID perimeter fence is still being constructed. The Federal Government approved N64 bn for the construction of 27.3-kilometre perimeter fence for UNIMAID. That place is very porous.

“The ASUU UNIMAID wrote to the Minister of Education through the ASUU president after an explosion during which we lost a professor and seven other staff,” The Punch quoted Prof Mamman as saying.

Legit.ng reached out to Prof Mamman via his Facebook account, Dani Mamman, to confirm the claim attributed to him.

He said it was N2.4 billion that was allocated for the project which includes construction of fence and procurement of security gadgets.

The UNIMAID ASUU chairman added that work has gone far on the project.

When asked if he was aware of the report by The Punch which attributed the N64 billion claim to him, Dr Mamman asked to be given time to check it out.

He later told Legit.ng that he had drawn the attention of the reporter to the error.

The UNIMAID ASUU chairman added that he has also made the clarification in an interview with Kanem FM, the university’s radio station.

He subsequently sent a statement to Legit.ng clarifying the one he made earlier on the cost of the perimeter fencing project.

Professor Mamman said one Mr Friday Uloko from The Punch approached him during the Eid-el Kabir break and requested for details concerning the perimeter fencing project, which he asked him to wait until work resumed to enable him get the proper document to provide him with the information he needed.

The UNIMAID ASUU chairman, however, said he was surprised the reporter went ahead to publish the report without getting back to him.

He said what the reporter presented as an interview for quoting the 64 billion naira is completely incorrect.

When asked for the document he was referring to, Prof Mamman said he could only access it when junior level staff (level one to 11) who have been asked to stay at home due to Covid-19 resume.

Legit.ng further contacted the Ministry of Education for relevant documents on the project. The ministry’s spokesman, Ben Goong, however said it is the university that can provide the requested documents.

The university is yet to respond to the mail sent by Legit.ng as at Friday, August 21.

Meanwhile, in February 2020, a report by NAN which has been reproduced here by the Federal Ministry of Information quoted the Minister of Education, Adamu Adamu, as saying that the Federal Executive Council (FEC) approved N1. 4 billion for the construction of 23.7km perimeter fence around UNIMAID.

Adamu added that N1.088 billion was approved  for the procurement and installation of security equipment around the fence.

“If you could recall, it (23.7km perimeter fence) was first approved around last year.

“But for reasons of some delay the work is going to commence only now; the project sum is N1. 4 billion with a completion period of 24 weeks.

“The second one is connected to the first because it is for the procurement and installation of security equipment around the fence.

“The sum of the contract is N1.088 billion and the completion period is 24 weeks,’’ the minister said.

The report can also be found here, here, and here.

Legit.ng made spirited efforts to obtain procurement documents to help strengthen the evidential basis of this report but official silence from the Ministry of Education and UNIMAID has made it impossible to further assess the claim.

Although news reports suggest the claim that the Federal Government is constructing a 27.3-kilometre perimeter fence at the university at the cost of N64bn is false, there is no sufficient evidence to support the reports.

This fact-check is a republished article from Legit.ng per our Dubawa 2020 Fellowship partnership with newsrooms and media organisations.

COVID-19 Immunisation Plot is a Hoax!

FALSE! Tyre Stealing Incident Did Not Happen In Ghana’s Ports