A tweet, by the Ondo State APC, claims that a Textile Mill at Ore, in Ondo State is constructed by the incumbent Governor of the state, Mr. Rotimi Arakurin Akeredolu.

Claim that the textile mill at Ondo-Linyi Industrial Hub in Ore is constructed by Rotimi Akeredolu is true. Evidence gathered points to the fact.

A tweet by the Ondo State APC claims that Rotimi Akeredolu, the incumbent governor of the state, constructed a Textile Mill at Ondo-Linyi Industrial Hub in Ore.

The tweet which was shared on August 7 has already generated 111 diverse comments, 111 retweets, and 279 likes.

Contrary to the claim, some Twitter users contended that the Governor ‘did nothing’ as regards the textile mill. 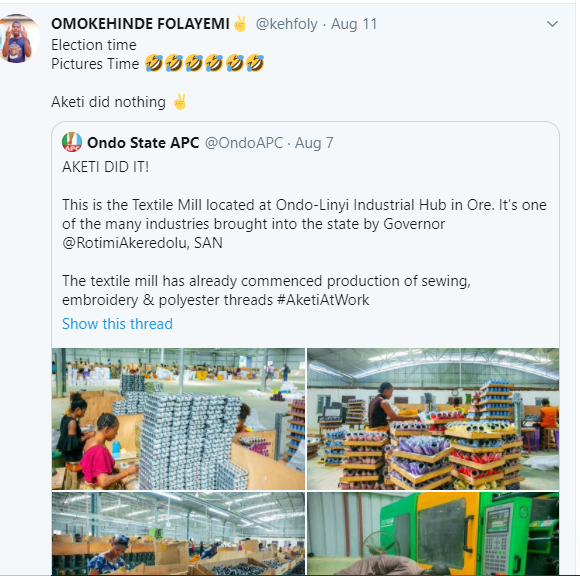 Regardless of these opposing views, political propaganda is most often at the peak during elections making separating accurate from incorrect information at such times important to the electorate. Therefore, Dubawa opted to uncover the veracity of the claim.

Evidence from reports sourced from various credible media indicates the Textile Mill was indeed constructed by Mr. Rotimi and commissioned by President Buhari in February 2020.

The Nigerian Investment Promotion Commission (NIPC) has also   confirmed the existence of the textile mill and attributed it to Mr. Rotimi in a report the commission published on its website.

Similarly, Vanguard Newspaper  reported the grand opening of the textile mill alongside other enterprises that were also commissioned by  President Buhari.  Another article on the achievements of  Governor Rotimi also cited the Text mill  in Ore as one of Akeredolu’s completed projects during his first term in office.

Another report quoted the Nigerian Manager of the WinWin Textile, Ahmed Adeyinka, in relation to the textile mill:

“We planned to move to the next stage of producing textile materials like lace and Ankara among others”. “Presently, we have 300 people working for us. We produce all kinds of sewing polyester thread for the local market. In a couple of months from now, the factory will begin to run at full capacity with the production of textile materials of all kinds.”

When contacted by Dubawa about the textile mill, Mr.Ahmed stated that:

“The Textile mill located at the Ondo – Linyi Industrial Hub in Ore is one of the many industries brought into the state by Governor Rotimi. The textile mill has already begun production of various types of sewing, embroidery, and polyester threads.”

The Textile Mill located at Ondo-Linyi Industrial Hub in Ore is actually constructed under the administration of Mr. Rotimi Akeredolu, the incumbent governor of the state. In February this year, 2020 President Buhari launched the textile Mill.