Claim: A user on Facebook, in a bind to the Nigerian context, claims that there is an ongoing protest in Algeria demanding that all political officials vacate office before elections.

The claim that there is an ongoing protest in Algeria demanding that all political office holders leave office before elections is misleading. The picture the user shared has been in existence since 2019 and the actual narrative of the photo contradicts the claims.

The EndSARS protest has been a source of both controversy and discussion of public interest. Nonetheless, one thing that has also become evident since the protest is the plethora of narratives linked to it. This range of narratives is sometimes carved from videos, photos, or even quotes made by popular persons. While some of the sources are authentic, some are hoaxes and others are a mishmash of both.

It’s in line with this reality, that a Facebook user, ‘Ayodele Adeyele Freedom Rhymer’ via a Facebook group ‘Abusites Home and Abroad’ shared a picture of what appears to be a crowd of people protesting on the streets, who the claimant scooped to be Algerians protesting for the complete overhaul of the entire government officials without elections. The narrative shared alongside the picture seems to share a sense of recency as the user links it to the Nigerian situation. His words, tagged alongside the photo  stated:

“Algerians on the street protesting for 2 days now, no movement of vehicles, all shops have been locked up, even soldiers and police joined them in the protest, saying they are not waiting for election, that they want them all out of political offices. The day we will have this type of protest in Nigeria, that day we all will be free.”

The post was shared on Wednesday 17th, November and the narrative appears to suggest that the situation is currently ongoing in Algeria. It has already attracted 59 reactions, 60 comments, and 9 shares within 24hrs of its appearance. As expected,  the post spawned a  debate amongst commenters with multiple views. One user, Ja’far Adamu conveyed that:

“Yes, we all supported them here cos they are fighting for just course. It is widely accepted so it is popular protest. I cannot see anywhere being set ablaze, no chaos, no looting of shops, no intimidation, no victimization, no vandalization and that is what is termed peaceful protest. The protest is coordinated and they have leaders unlike the unpopular #EndSARS protest we had in Nigeria that ended up with a lot of casualties.”

However, another user, Abdulrazag Jibril argued that: “This is not a protest” another user, Nazeer Abdullahi Bachirawa even posed the post as “fake news. This is a carnival” he contested.

Whatever the case may be, the post has obviously stirred up a debate which Dubawa opts to uncover.

Dubawa carried out a preliminary analysis of the picture on Invid multimedia verifier shared by its source and the actual narrative behind it.  The picture was uncovered to have been first shared on a news website called “www. socialist.ca” on March 20, 2019. 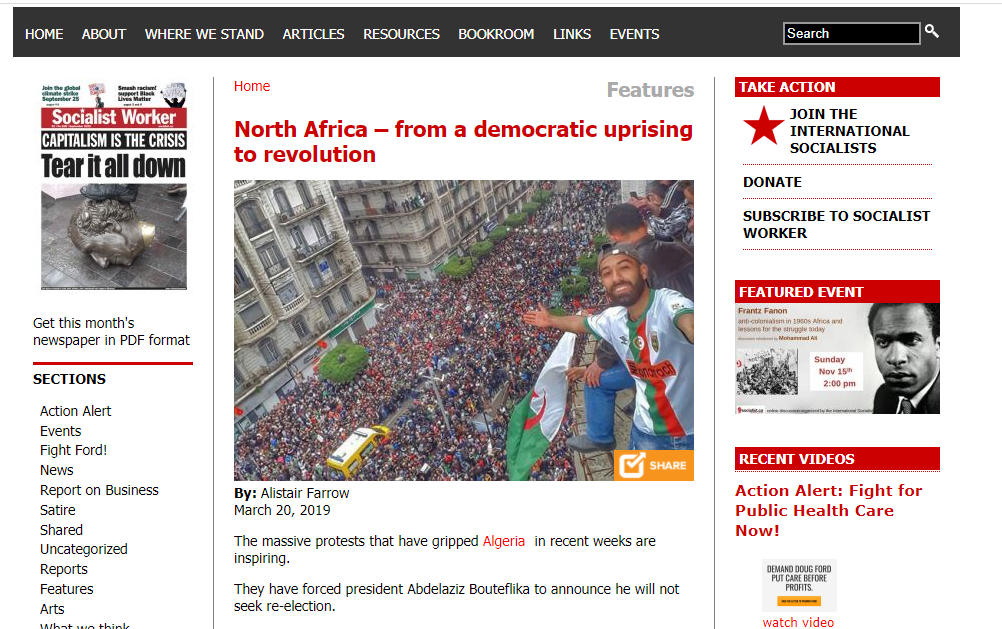 While the actual narrative about the picture was confirmed to have been taken during the Algerian protest in 2019 to condemn  President Abdelaziz Bouteflika’s intention to pursue a fifth term in the Algerian 2019 April elections,  the protests began on February 22nd, 2019 in some towns and then escalated fast around the country. However, contrary to the claimant’s narrative,  the protest took place in 2019, lasted for more than two days, and was aimed at bringing about an end to Mr. Bouteflika’s reign.  The main reason that triggered the protest concerns the fact that Bouteflika has been president for four consecutive terms while seeking a fifth term.

Though the picture was taken from Algeria during a protest. Findings contradict the claimant’s narrative as the photo has been in existence since 2019 and was not because of the claimant’s reasons: “They are not waiting for election, That they want them all out of political offices.”  The picture was simply a protest to dissuade President Abdelaziz Bouteflika from his intentions to pursue a fifth term in office.  Hence, this claim is misleading.

This is not image of repentant bandit absorbed as customs officer