Twitter wants you to open links before retweeting; how will this help in containing the fake news in Nigeria?

Since they took heat for allegedly enabling malicious actors in 2016 US Elections, Facebook and Twitter are doing everything they can to avoid such errors.

Since then, the social media giants have rolled out features and initiatives to combat misinformation/disinformation on their respective platforms.

In its latest effort to contain the spread of fake news, Twitter has a new feature which urges users to read a news article before retweeting it.

Twitter wants you to have a full grasp of the information you want to reshare on its platform. 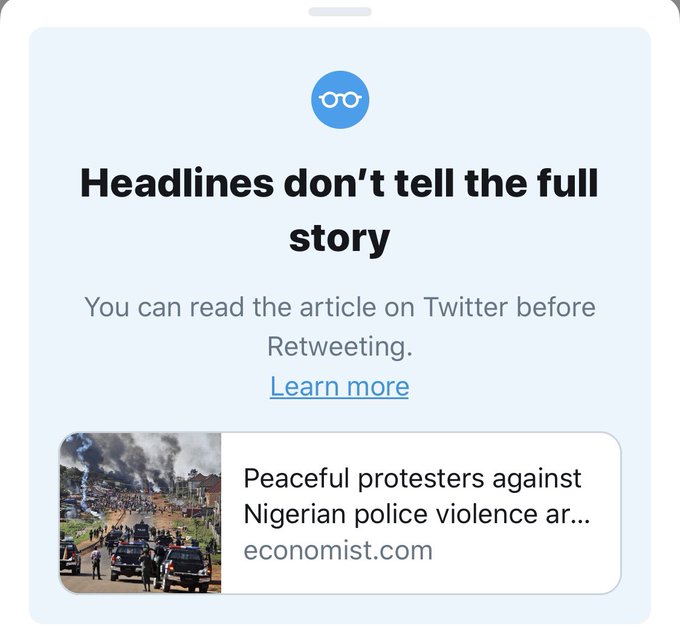 Twitter says its motivation is to ‘help promote informed discussion’ and share some results from its initial test of the feature that shows the promptly opened articles 40% more often and that the overall proportion of people opening news articles before retweeting increased by 33%.

“Sharing an article can spark conversation, so you may want to read it before you Tweet it. To help promote informed discussion, we’re testing a new prompt on Android –– when you Retweet an article that you haven’t opened on Twitter, we may ask if you’d like to open it first,” Twitter said in its first announcement of the feature in June.

Since that early testing, the feature has been expanded globally including in Nigeria,  but how much help would it do here?

“The problem is people share content without reading it so this is a great way of making people make informed decisions on whether they want to share what they just read,” Ben Bassey, Editor-In-Chief of Nigerian Online news.

“It will help in curbing fake news because when you read it and notice that it’s fake, then you are not going to share it.”

Ikemesit Effiong, who is the Head Of Research at SBM Intelligence, a geopolitical consultancy based in Lagos, stated that with the feature, Nigerians are reaping the benefits of stronger regulations elsewhere.

“The feature is another way for Twitter to curb fake news and disinformation,” Effiong said.

“Fake news on social media has been of enormous concern. In a lot of Twitter’s main markets, they have been more complains. There was a congressional hearing in the United States of America and in Europe, there were regulations put in place that mandated these social media companies to act.

“So Nigerian consumers are basically reaping the benefit of stronger regulations elsewhere.

“ I find it interesting, I find the feature very useful even on a personal level, As a researcher, I find myself trying to retweet stuff without reading it,”

“It actually causes you to stop and examine the content. Great idea.”

Also from SBM Intelligence, Cheta Nwanze who is the Lead Partner and an Informational Technology and Media expert said the feature makes no difference from a Nigerian perspective.

Nwanze used a recent headline by Daily Trust which depicted that the Minister of Sports Sunday Dare said they needed N81 million to cut grass in a stadium.

“All people could have done was just read the article to find out that the Minister didn’t say it,” Nwanze said.

“From a Nigerian point of view, the feature makes no difference because Nigerians can’t comprehend English and most people are not interested in reading.”