Network Analysis: How to find, trace voices behind the ‘noise’ on social media

In a digital open-source investigation, there is interest in the individuals or entities in focus, but it is valuable to understand the network they are a part of and this is where network analysis comes in.

Network analysis is the process of looking at the connections between people and entities to gain insights for your investigations. You can find out information hidden in plain sight by analyzing a random dataset and the network craft.

Dataset analysis is particularly useful not only in investigative journalism but also in the art of storytelling. With network analysis, journalists can expose controversial connections and clusters of influences that connect the dots between relationships and power, which are otherwise unseen.

Why network analysis is useful for digital investigations

Network analysis is both a data journalism technique and open-source intelligence (OSINT) technique. It is not yet widely applied in local journalism as a result of accessibility to the tools necessary to properly execute a digital analysis. These tools are not often free and have only become accessible in the last few years.

Network analysis can be useful to generate or check information by revealing patterns between social entities. It is valuable in communicating a story and allows the reader to explore a system of social influence. These influences could be political, social, economic, or business.

In journalistic practices, it can show connections between people looking at commonalities across fields such as education, employment history, or religious groups. It can reveal relationships between companies and directors within a company.

On social media, it can show the degree of density of relationships between influencers, cliques, power brokers and the outliers. Density is determined by the roles they play, who is the centre of influence, who acts as a bridge between different groups, and who is on the margins. It can also show a transition, revealing how much has changed over a particular time.

Network analysis explores two main ideas. Nodes and Connections. Nodes or elements are the entities you are interested in at a time. It is measurable. It could be in the form of documents or locations, individuals or organisations, while connections or edges are the relationships between the nodes.

Here is an example of how network analysis is used in journalism. In this video, the BBC uses it in visualising the relationships between political players on Twitter.

This other example applies network analysis and visualization to the characters of Game of Thrones, a popular fan-fiction book and television show.

Other areas where network analysis is applicable:

Performing network analysis is a good way to reveal digital connections. Fincen-files is an area where network analysis is specifically helpful to do investigations into companies, such as the investigation into the Panama Papers by the International Consortium of Investigative Journalists to which the Premium Times Centre for Investigative Journalism belongs. On the website of the International Consortium of Investigative Journalists (ICIJ), you can look at a network data map, and this map shows information about transactions that have been flagged by financial institutions such as suspicious United States authorities. Fincen is the US Financial Crimes Enforcement Network. It is a section of the US Treasury Department in charge of investigating financial crimes.

Investigative journalists at Bellingcat researched the account of the head of the World Health Organization. They observed that he was repeatedly targeted with memes, all of them very similar. Through network analysis and visualization they discovered that only a few Twitter accounts were sending out those memes over and over again, which most likely represented a sort of network activity. 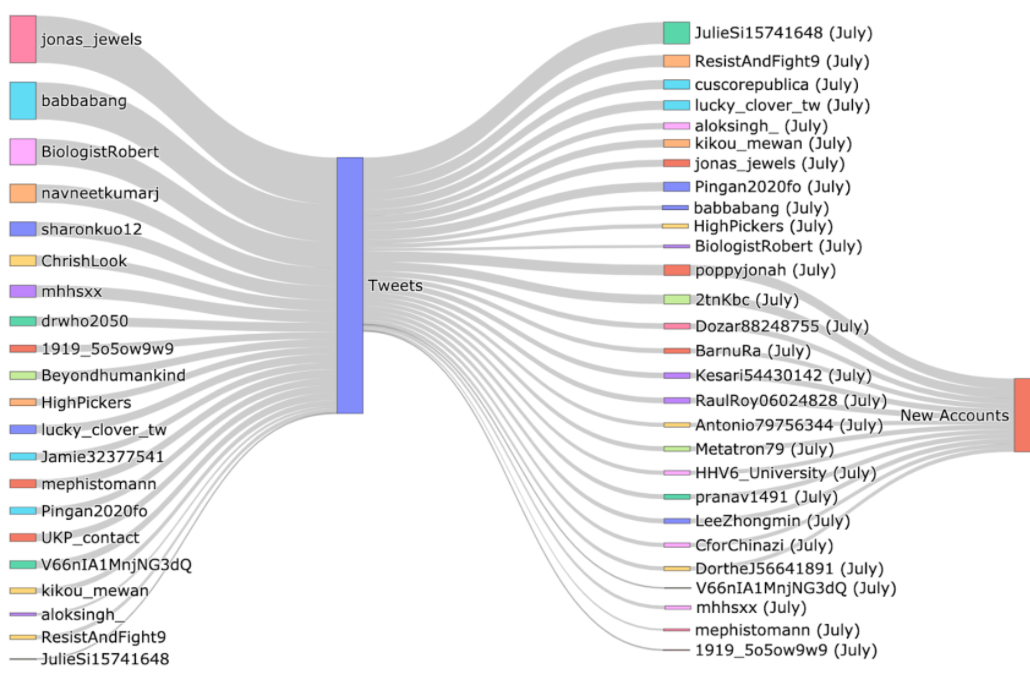 Admittedly, these are complex examples but sometimes network analysis can be as simple as collecting a list of creation dates from several twitter accounts.

Challenges Faced in the Practise of Network Analysis in Journalism:

Jonathan Stray, a fellow and lecturer at the School Journalism, Columbia University and author of Network Analysis in Journalism Practises and Possibilities cites a few challenges of network analysis in journalism. The first challenge, he says, is the cost of acquiring data which is very often expensive, as some documents require a pay-per-page. Then, there is a record linkage problem where graph queries may not be helpful even though they are better than algorithmic techniques at investigating diverse data sets.

There is the issue of context. Most of the information needed to interpret the network is not contained in the network and the story; in reality, it is more complex than simple computation…

Nigeria’s Information Minister Lai Mohammed denied that he once announced a N5 million fine on hate speech in Nigeria. How accurate is this?

A certain website, bearing the emblem of the National Directorate of Employment claims that the federal government of Nigeria is offering employment and recruiting 50,000 youths via a …

On Tuesday, November 24, Farooq Kperogi, an associate professor of journalism and emerging media in the United States, posted a tweet with two major verifiable claims. Firstly, he claimed that…

Moderna vaccine also known as mRNA-1273 is a vaccine in response to the threat of coronavirus by a biotechnology company named Moderna founded in 2010. The vaccine made the list of the World Health Organization as one of the 48 candidate vaccines in clinical evaluation. (Here is the detail on the phases this vaccine has gone through.)

A report by The Guardian noted final results confirm the Moderna vaccine has 94% efficacy. Another report by BBC noted the vaccine shows near 95% effectiveness. A similar report by Science Magazine noted that no one who got the Moderna vaccine in trial developed severe COVID-19. In a look at the Moderna website Dubawa studied an Infographic that contained a timeline summary of the different stages of the vaccine. This timeline showed that as of November 16, the vaccine so far has 94.5% efficacy. On November 30, 2020 Modema noted that its vaccine is 94.1% effective against COVID-19 and 100% effective against severe COVID-19. (Read more about Covid19 severity here)

Farooq Kperogi, an associate professor of journalism, claimed in a tweet that “Nigeria is d 2nd most terrorized country on earth.” This is incorrect as the Latest global terrorism report by the Institute for Economics and Peace ranked Nigeria the third most terrorised country globally.

As published by Global Excellence, an Online Blog, on Friday, 4th of November, the Permanent Secretary, Ministry of Communications and Digital Economy, Musa Istifanus, has allegedly announced that about 106 radio frequencies are used without Federal Government’s authorisation. But, how true is this? Which credible platform has published this story? Be sure to verify before sharing.