On the 1st of October, 1960, Nigeria gained her independence from the British colonial rule. By this act, the country instituted a quasi self-governing state with Sir Abubakar Tafawa Balewa becoming the prime minister, and Queen Elizabeth II remaining the head of state. Three years later, Nigeria severed its relationship with the British monarchy, adopted the Republican system of government, and Sir Nnamdi Azikiwe emerged as the first president of the Federal Republic of Nigeria.

According to a report by Aljazeera, “large oil reserves discovered in 1956 had brought hopes of wealth and fortune to many.” To the contrary, a 3-year civil war, followed by 30 years of coups, counter-coups and military dictatorship; and subsequent 20 years of government looting and terrorism, have ensured that the country lies in a state of rising poverty and insecurity.

In 2018, Nigeria overtook India as the poverty capital of the world. Currently, 105million people (51% of the Nigerian population) live in extreme poverty, a figure which is double that of India. In 2019, Nigeria was ranked as the 3rd most terrorised country in the world, ahead of Syria, Yemen and Pakistan, although this number may  drop when the results for 2020 are released in November.

[For detailed analysis on poverty and insecurity in Nigeria and the limitations of these findings, read some of our fact checks here and here.

While data from the World Bank also shows that Nigeria faces its worst recession in 40 years, some politicians and average Nigerians believe that this paints an unfair picture of the country and the achievements of the current administration despite force majeure events.

One of these events includes the debt portfolio inherited from the past administration. An ex-spokesperson to the former president Goodluck Jonathan, Reno Omokri on Twitter wrote that the last administration met a debt of N7.9trillion in 2010 and in five years, Mr Jonathan only borrowed the sum of N4.7 trillion. However, the incumbent president, Muhammadu Buhari, met a debt of N12 trillion and has borrowed N18.9trillion.

Although not the intention of the tweeter, this claim implies that the present administration inherited a larger debt portfolio than its predecessor. Our fact-check shows that indeed Nigeria’s total debt profile was pegged at N12.12 trillion as of June 2015 but the debt profile in December 2010 was N5.23 trillion as opposed to N7.9 trillion.

Another of such events is the dwindling oil prices which has adversely affected the economy, yet the current administration has “introduced unprecedented measures … in the shape of tradermoni, farmermoni, school feeding programme, job creation efforts and agricultural intervention programmes”, says President Buhari during his independence day speech last Thursday.

As noble as these programmes may be, Dubawa has consistently tried to conduct research on the beneficiaries and expenditure of these programmes but have been fraught with difficulties. On one occasion, the National Social Investment Office refused to provide details on the actual number of beneficiaries of these programmes with an explanation that the FOI Act prohibits the sharing of personal information of individuals who are currently receiving financial and social grants from public institutions without their consent.

Also paradoxical is the fact that Nigeria hasn’t recorded successes in the areas supposed to be positively affected by the “unprecedented measures”. Nigeria’s out-of-school children problem worsens (though exacerbated by Covid-19) and there is a steady rise in the prices of food across the country, which negates the benefits of the agricultural programmes.

On September 11, Garba Shehu, the Senior Special Assistant for Media and Publicity to President Muhammadu Buhari, stated that though prices may differ across the country,  there was a general drop in prices of food items owing to Buhari’s reforms in the agricultural sector. Our research shows that this is false – Nigeria’s inflation rate, the rate at which the average price level of goods and services in an economy increases over some period of time, has increased by 13.22% in August 2020. The increment is 0.40 per cent points higher than the rate recorded in July 2020 (12.82 percent).

While all is not gloom and we can only hope for better times, what we expect to remain constant is the continuous (and heavier by the day) burden placed on citizens to sift through the myriad truths, lies, and half truths thrown at them by politically or financially motivated persons.  Yet the burden can be made lighter if we, ironically, take responsibility for understanding issues more fully and seeking out data that will provide the most honest and relevant truths.

[For more facts about Nigeria’s history, check out our independence day publications on the Portuguese links to the country and the subject of nation “discovery”, the reasons for moving Nigeria’s capital to Abuja, examining Nigeria’s wealth prior to crude oil exploration and the agelong myth about the Nigeria-India football match.]

Garba Shehu, the Senior Special Assistant for Media and Publicity to President Muhammadu Buhari, claimed on Friday, September 11th while speaking on Channels Television’s Sunrise Daily, that there…

On Thursday, September 17, 2020, seventeen out of eighteen candidates slugged it out at the “Voice of Next Vice-Chancellor 2020” ― an event where aspiring University of Ibadan (UI) VC candidates shared their manifestoes and plans with the UI Community…

Mr. Michael Ale, Co-Founder and Chief Executive Officer of Development Nigeria said at a forum organised by his development platform recently in Lagos, that Nigeria, in five years, has performed poorly in the attainment of the SDGs. Our findings show…

According to Wordometer, as of October  4th, the total figure of active global cases is 7,981,298, of this figure, only 1% is in serious or critical condition while 99% are in mild condition. Meanwhile, in Nigeria, on the same day, there are 77,456 active cases. Further, of the total confirmed cases (59,287) in the country, 50,718 people have been discharged so far. This is as presented by the Nigeria Centre for Disease Control (NCDC).

Although there is still no specific cure for the virus, the New York Times Coronavirus Tracker has listed 5 vaccines approved for limited or early use.

In this digital age, fact checking has been made very easy with the features of the internet. Sitting in the comfort of your home, you can check multiple news sources to verify stories and other information. There are also many verification software that are user friendly and easily available via the internet. But, how does one fact-check information in a non-internet environment? Here are some simple and effective ways of fact checking without the internet: 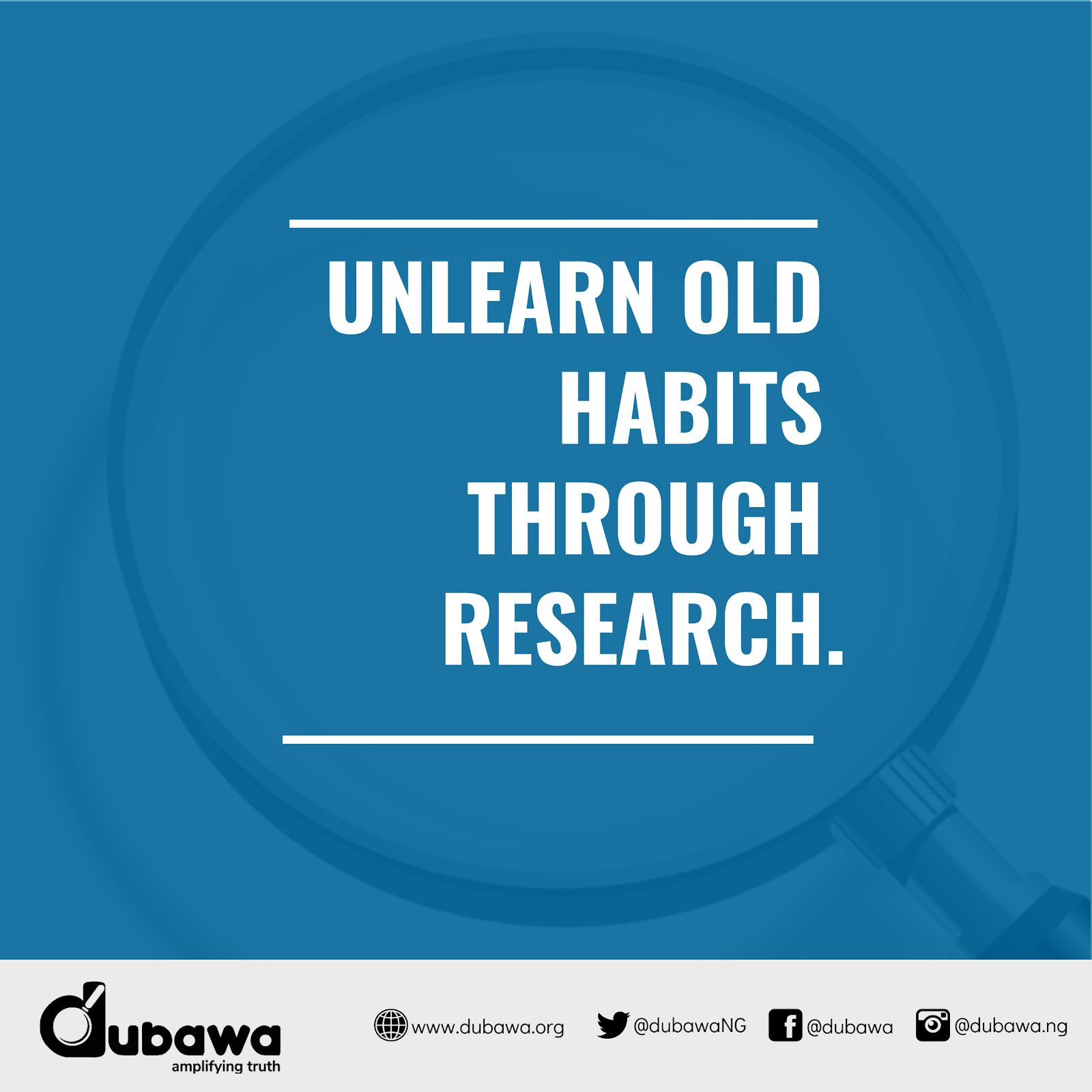 It is a usual practice for politicians to make bogus claims about their past achievements just as the former vice president may have done in this tweet. Do not be in a hurry to believe this tweet; keep an open mind as you seek verification for this claim.

The Special Anti Robbery Squad has been the center of social media discourse as its recent activities have triggered controversy across the country.  Consequently, Nigerians call for the scrapping of SARS. Coming amidst the horrid video and images circulating the media is the allegation that in the 2020/2021 SARS recruitment form, it was stated that ‘candidate must be an ex-convict.’ But, how true is this? As a media consumer, be sure to leave no stone unturned when faced with sensitive claims such as this. Be sure to check and check again before spreading further.

How true is claim COVID-19 virus gets neutralised by human breast milk?